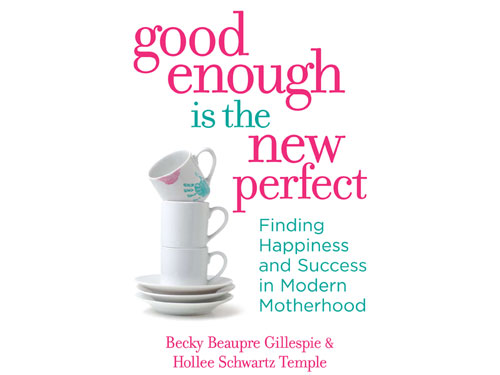 This is not a book about settling.

Women today earn more than half of all bachelor’s degrees, hold more managerial positions than men, are earning higher and higher salaries and doing all of this while having families on their timeline.  It would only make sense that this generation of girls born to Have It All would be the happiest in history. So why is it that study after study shows that women’s happiness levels have been decreasing—and what can they do about it?

Based on exclusive data, more than 100 in-depth interviews, and the latest research, Good Enough Is the New Perfect builds on the growing “anti-perfection parenting” movement by being the first book to present empirical evidence that this philosophy offers an advantage. Drawing on their groundbreaking original survey of 905 working mothers, authors Becky Beaupre Gillespie and Hollee Schwartz Temple have discovered a paradigm shift in motherhood today: More and more mothers are losing their Never Enough attitude and embracing a Good Enough mindset to be happier, more confident and more successful.

Some surprising findings from the authors’ survey, which included working mothers  from a broad range of professions and from nearly every state in the nation:

Told through the inspiring stories of real moms—executives and entrepreneurs, doctors and lawyers—Good Enough is the New Perfect blends expert advice and solid research to offer a true roadmap for the incredible balancing act we call motherhood.

Order “Good Enough is the New Perfect” from Amazon or visit the book’s website.

Becky and Hollee are the work/life balance columnists for the ABA Journal, the nation’s premiere lawyer magazine. Both graduates of Northwestern University’s Medill School of Journalism, they first worked together in the early 1990s, when Becky was Hollee’s first editor at The Daily Northwestern. Like so many of the working mothers they interviewed, they forged non-linear career paths, taking detours in their quests to balance work and family. They blog about work/life and parenting issues at TheNewPerfect.com.

Becky is an award-winning journalist who has written for the Chicago Sun-Times, The Detroit News, USA Today and the Democrat and Chronicle of Rochester, N.Y. In 2001, while on staff at the Sun-Times, she co-wrote a groundbreaking investigative series on “failing teachers” that led to statewide reforms in teacher testing and a crackdown on teacher quality in the Chicago Public Schools. The three-day series, which began one week after the birth of her first child, gave Becky her first experience at balancing motherhood and career. She lives in Chicago with her husband, Pete, an employment litigator, and their two daughters.

Hollee is a journalist-turned-lawyer-turned-professor at West Virginia University College of Law. After graduating at the top of her class with a bachelor’s and master’s degree from Northwestern University’s Medill School of Journalism, Hollee headed to Duke University School of Law. She graduated in 1999, and then began a four-year stint as a litigation associate at an international law firm. After her first son was born in 2002, Temple returned to her firm on a part-time basis before joining the WVU faculty the next year. Hollee lives in Morgantown, West Virginia, with her husband, John, an author and journalism professor, and their two sons, Gideon and Henry.

The Solo Practice University® COOP is a showcase of products and services for solo lawyers.