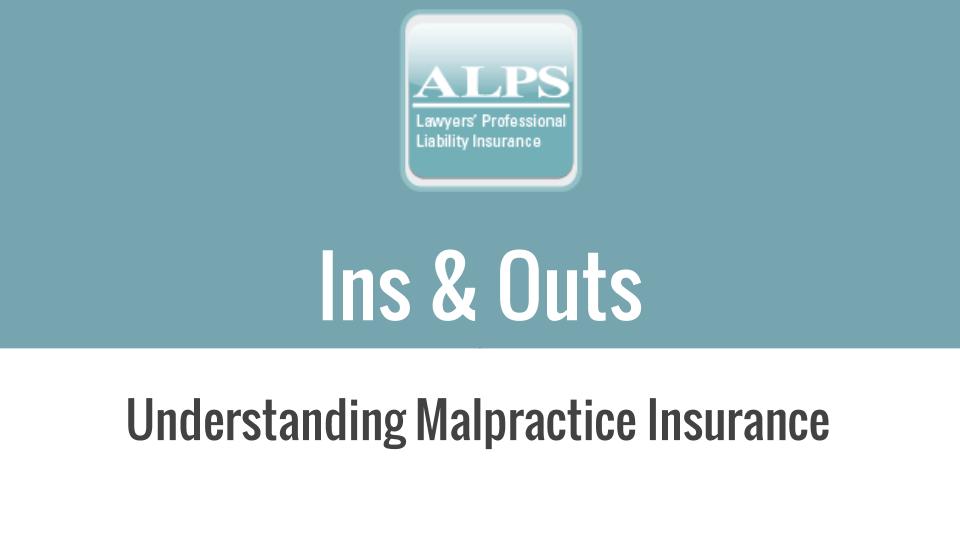 I have yet to read an insurance policy that I would consider a great read. So let’s admit it, insurance policies are rather boring. I suspect few of you have ever really taken the time to read completely through your home owners or auto policy. There’s nothing necessarily wrong with this as long as your various policies end up covering you for what you think they should when you need them to.

Now I’m not trying to convince you to run to your insurance file and read all your policies cover to cover. That would put all but the heartiest of souls to sleep. However, I am hoping to have you appreciate that running with assumptions when purchasing a malpractice policy can be a risky play because, if and when a claim arises, some end up finding that their coverage isn’t what they thought it was. With this in mind I have shared a few tips that can help take you through the process a little more informed.

Legal malpractice insurance policies are claims-made products. This means that an attorney is afforded coverage for claims made and reported to the insurance company while a policy is in force. Further, the act, error or omission upon which the claim is based had to occur after the policy’s retroactive date. Unless a gap in coverage occurred, this date is usually the inception date of the first claims-made policy purchased. Malpractice policies provide coverage for one year and in order for an attorney to have coverage in force at all times, a new policy must be purchased every year. Here’s the bottom-line. Buy coverage as soon as you start practicing and keep it in place every year thereafter for as long as you are in practice.

Take whatever time is necessary to complete the entire application, be detailed in your answers, and understand that presentation matters. A sloppy or incomplete application raises questions about your ability to attend to the details of your work. One of the benefits of providing detailed answers comes from taking advantage of the opportunity to explain all the loss prevention measures you have instituted. Insurance carriers want to know the frequency with which you use letters and/or other writings to confirm the existence, non-existence, and/or end of an attorney-client relationship. Knowing that you have effective calendaring and docket control systems in place is just as important. If you rely on a computerized rules-based calendaring system, that’s even better but the carrier won’t know that if you never share the information. Carriers also want to know what steps you have taken to prevent the reoccurrence of the claim or claims similar to any that have been listed in your application. It’s your chance to explain why you remain a good risk so don’t gloss over that one.

Don’t submit an application at the last minute. When a lawyer has had her renewal application for 90 days but ends up not returning it until just before the renewal deadline, concerns about how she treats other critical deadlines start to arise.

Be truthful and never withhold information. Dishonesty or withholding damaging information during the application process can result in the carrier voiding the policy at a later date. Should that ever happen you will not only find that you have no coverage for a current claim but you will have also lost coverage for your prior acts. Not good!

Consider adding a cover letter to your application in order to provide details about the image, reputation, and operation of your firm. Try to differentiate your practice from all the others in town. In short, explain why an underwriter should feel comfortable insuring the risk that you represent. With some carriers, this kind of information can positively affect the premium that will be quoted.

Before purchasing any policy, make certain you understand what you will be getting for the money you’re about to spend. Sometimes significant price differences between two seemingly similar policies are due to policy differences that are not always readily apparent. Here are the key items you need to understand.

Policy Limits. This is arguably the most important part of any malpractice policy. Identify the per claim limit and the aggregate limit which are normally expressed in a per claim/aggregate manner. If policy limits are expressed as $250,000/$500,000, this would mean that you would have $250,000 in indemnity coverage for each specific claim filed in a given policy period and up to a total of $500,000 for all claims reported during the same period. Purchase limits that you can afford and that make sense given what potential losses might look like in light of the specifics of your practice.

Defense Costs. Defense costs can be deceiving. Significant price differences between two quotes on two polices with the same limits can be a signal that one of the quotes is based upon a policy where defense costs have been paced inside the limits of liability. Policies such as this are often referred to as self-liquidating or cannibalizing polices. In short, if defense costs are inside policy limits, then each dollar spent on defending a claim will reduce what will be available to pay any settlement or judgment by one dollar. The end result is that a policy with defense costs inside limits really means that you are purchasing a policy that will often result in drastically reduced amounts of available indemnity coverage. The bottom-line is that a $250,000/$500,000 policy with defense costs inside the limits really isn’t what it first appears to be.

A better alternative is a policy that provides for a claims expense allowance. This basically means that defense costs are outside of policy limits. The claims expense allowance will have set limits and policy terms will vary, but significant defense costs will be paid by the carrier before the policy limits begin to self-liquidate. These policies will be more expensive because additional coverage comes with the policy. Here, a policy with $250,000/$500,000 limits is just what it appears to be in all but the most costly of claims in terms of defense costs.

Deductible. Most policies contain deductible clauses and the specific terms can vary greatly. Make certain you understand when and why you may have to pay your deductible because policies can be canceled or nonrenewed for nonpayment of the deductible. Look for policies that provide for “first dollar defense,” otherwise known as loss only deductibles, which means that the obligation to pay the deductible only arises if and when a settlement is reached or an adverse judgment is entered. Given that a majority of claims with defense costs still resolve without a loss payout, this can be an attractive benefit. Other options worth looking for might include reduced deductibles for claims resolved through mediation and a limit on the number of deductibles that must be paid in a given policy period.

Specific Policy Features and Coverage Concerns. It is extremely important that you know just what is and is not covered under your policy. For example, does the policy provide directors and officers coverage if you sit on a corporate board? In the for profit arena, the answer to this question is usually no. However, limited coverage may be extended to attorneys sitting on not-for-profit boards. Look for this benefit if you have a desire to give back to the community in this fashion.

Is coverage available for disciplinary proceedings? Given the high number of disciplinary complaints made each year, don’t run with assumptions. Many attorneys are surprised to learn that policies generally exclude coverage for disciplinary matters. That said, such coverage may be available and usually the cost is quite reasonable. If this is a concern, ask for it.

Understand the policy’s consent to settle clause. Is it what is commonly referred to as a “hammer clause?” Policy language typically requires that an insurer seek an insured’s approval prior to settling a claim for a specific amount. If the insured does not approve the recommended figure, however, a hammer clause will state that the insurer will not be liable for any additional monies required to settle the claim or for the defense costs that accrue from the point after the settlement recommendation is made by the insurer. In other words, such clauses tend to force an insured to accept the carrier’s recommendation. Look for policies that have no hammer clause thereby allowing meaningful participation in settlement decisions. A policy that allows for meaningful participation in the selection of mutually acceptable defense counsel would be similarly advantageous.

Exclusions. Not only should you be aware of what is covered, it is equally important to know what isn’t covered. Again, policies differ but most exclude dishonest, fraudulent, malicious, and criminal acts. In addition, work comp, bodily injury, property damage, sexual harassment, and discrimination claims are excluded. So too are obligations that arise under contract and the giving of investment advice. Be aware that every policy will have its own unique list of exclusions so it is important to carefully read and understand just what is and is not covered prior to purchasing your policy. I know it’s not exciting stuff to read through, but this is where your assumptions can really lead you astray. If something doesn’t make any sense, ask for an explanation. The carrier will tell you.