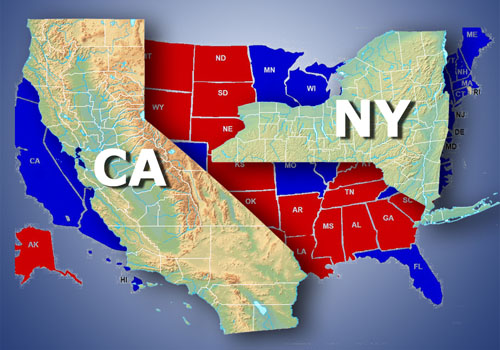 This summer, we got some interesting bar exam news. Two of the most notorious bar exams in the country, New York and California, have some major changes coming around the bend. If you are set to take the bar exam after July 2016 in New York or July 2017 in California, read on.

The New York Bar who, until now, has administered it’s own unique New York exam has opted to switch to the Uniform Bar Exam (“UBE”). The UBE is a two-day test administered in multiple jurisdictions around the country. On the Tuesday of the exam, examinees take the Multistate Essay Exam (“MEE”) and the Multistate Performance Test (“MPT”). The MEE consists of six thirty-minute essays pulled from the following topic areas: Business Associations (Agency and Partnership; Corporations and Limited Liability Companies), Civil Procedure, Conflict of Laws, Constitutional Law, Contracts, Criminal Law and Procedure, Evidence, Family Law, Real Property, Torts, Trusts and Estates, and Secured Transactions.

The Tuesday administration also includes two MPTs that are each 90-minute questions designed to simulate legal practice by having examinees assemble a broad array of facts and law into a coherent essay.

Wednesday will remain the same as it always has, with New York administering the Multistate Bar Exam (“MBE”). This includes six-hours of multiple choice questions.

What is so different about the UBE? Well, first, the essays will not test any New York specific law. This may make it easier for a bar taker coming from out of state to sit for and pass the exam. New York has also removed the fifty New York specific multiple choice questions and there will now be two instead of one MPT question.

The real draw of the UBE is that it allows for “score portability.” This means that once you pass the UBE in one jurisdiction, it can be transferred to another to allow for instant licensing. This may change how many attorneys find themselves needing to sit for the bar exam in New York if they have already taken the UBE in another state. But each state will still have the opportunity to set their own passing guidelines.

California Shifts to a Two-Day Exam

In July 2017, California will shift from a three-day bar exam to a two-day bar exam. The exam will include one day of essays and one day of the MBE (which is more typical of other jurisdictions). The essay day will likely include five one-hour essays and one 90-minute performance test (Note, it doesn’t seem that California is adopting the MPT, but it is going to shift it’s performance test from being three hours to 90 minutes). Each day will be weighed equally when it comes to scoring.

For those sitting for the exam in 2017, the biggest changes will be that there is significantly less writing on the exam. Instead of six one-hour essays there will now be five. Instead of six hours of performance test exams there will be just 90 minutes. The multiple-choice portion will stay the same.

I think, for many people this may make no difference in their ability to be successful on the bar exam in California. However, currently, if you struggle with multiple choice, you can often pad your score with excellent writing scores to make up for possible knowledge-of-the-law issues. But now that multiple choice is going to be 50% of  your score, you better make sure that you are confident in your ability to perform well on the MBE.

On the other hand, some folks find the amount of writing on the bar exam overwhelming. So for some these changes might be welcome news. But everyone should note that California doesn’t seem to be planning to make the bar exam any easier. The state will likely still set the scoring as to keep passage rates low and consistent with the three-day exam.

Still, if I was sitting for the exam in July 2017, I would be excited about the fact that I only needed to live through two days of testing instead of three. That third day of testing, if I am being honest, is brutal!

It was shocking to me that California made this change, but I hope it will bring some other positive changes too, like reducing the time it takes to publish results — as California is always the last state to release results and they do so the Friday before the Thanksgiving holiday. Bad bar exam news is not a great way to start the holiday season!

What will be the next major jurisdiction to change their bar exam? We will have to wait to find out!