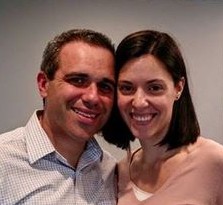 This wonderful new column written by Ryan McKeen and Allison McKeen, husband and wife, partners in life and law, is going to be a realistic and fun “He Said, She Said” perspective on creating and building a life and a law practice together – the good, the bad, and the ugly.

After law school, Allison went to work for one of the largest firms in Connecticut as an associate. I went to work for a small general practice firm comprised of 5 lawyers. In 2009, Allison left her job at the firm to work for the State of Connecticut. At the time we were hoping to start a family, and the idea of a 9 to 5 job (most of the year) was appealing to us.

In 2012, I left my small firm to open a firm with partners. I had two partners. The hope was that in a year or two Allison could join us. Starting a law firm is hard. Unfortunately, my partnership did not work out. My former partners and I decided it was best to move on sooner rather than later. We were in business together for 1 year.

In 2013, I opened a solo practice. “The Law Offices of Ryan McKeen” was never an option for a name. Despite life taking us in directions we hadn’t planned – the dream of working together was still alive. My new firm would be called “McKeen Law Firm, LLC”. It was in many ways aspirational.

In opening both of my firms, Allison having a steady paycheck and benefits took away some of the stress. Of course, we could not survive on her salary alone. We had two young children, law school debt, and child care expenses.

We have both been in practice for 10 years. We went to law school together. We graduated in 2005. We have been dating since high school. We have been married for 12 years. We have two children ages 5 and 2.

Practicing together was always the dream. But it was a dream delayed for sure.

Over the years I’ve represented a number of immigrant families. Regardless of where they are from, there story has a common theme – one person left the old country to come here, find a job, a home, and put down roots in the community. The rest of the family would follow some time later. When things were more settled.

Having started two firms in two years – I knew the pressures of doing so. I was always concerned about money. When I first started, I bought a bike seat for my daughter. It was $100 from the local bike store. I thought going for rides with my then 2 year old daughter would relieve some stress. When I walked in the door with the bike seat, Allison said “we can’t afford that….take it back”. I did. Stung by that, I spent the night working on files.

In many respects, from a business perspective, being in a place to add Allison was similar to what my immigrant clients had navigated for their familes. I needed stability. Adding Allison to an unstable situation would have been terrible.

I spent a lot of time building McKeen Law Firm, LLC. I built my website, my back office, my vendor list, and all of the million other pieces that go into getting a small firm off the ground.

I also grew my business. Since Allison was coming from state work she was coming without clients. If she was going to join me, I needed to have work for her to at least give her time to get on her feet.

But even then the decision to add Allison wasn’t an easy one. The questions I had were: Did we have enough of a cushion? Do I have enough of a volume of business to sustain Allison? What do the next 6 months look like financially?

In December, I settled a significant personal injury case. This put the final piece of the puzzle in place. We had a financial cushion to absorb the loss of Allison’s salary and to invest in getting her set up at McKeen Law Firm, LLC.

Once the case settled, we both knew it was time to make the move. We wanted the flexibility that comes from self employment. We felt it was best for our family. I was also at the point in the business that I needed help. I had too much on my plate.

For us, the stars had to align before I felt comfortable having Allison join the business. Though it took 9 years, it was only after the business was established, there was a need in terms of workflow, and we had a financial cushion that the stars were aligned.

As Ryan said, we’d always been partners in life. Still, making the decision to be partners in business wasn’t an easy one. I was comfortably settled in a State job doing work that I enjoyed. I had health insurance and a stable salary, and I’d supported our family while Ryan opened McKeen Law Firm and got it off the ground. I had glowing performance reviews and a recent promotion. Why leave?

But when I took a step back, I realized my hesitation was fear of risk. My State job was stable, but I’d become a bit too complacent. I’d stopped growing in my position.
As much as I enjoyed the security of my job, I also found it increasingly rigid. I couldn’t work from home if I had a sick child, for example. When I’d get the call from daycare telling me that someone had a fever, I’d panic. How much sick time did I have left? How would I meet that looming deadline? Who could take care of my child so I could work? The office policy was to make other arrangements for our personal life when there was work to do, but that was sort of impossible. Ryan and I don’t have that kind of support, and the expectation left me in a near constant state of anxiety.

Then there was my health. I worked for the General Assembly, so at the end of the legislative session I would get an average of four broken hours of sleep a night for a week or two. In the 2014 session, that sleeping schedule kicked off a string of migraines that lasted from May through October, resolving only after my toddler son finally started sleeping through the night and I was able to catch up. It became apparent that staying at my job required me to neglect my professional growth, my family, and my health. I could not work there and live to my best potential.

So I left. Life is too short. I’ve always wanted to practice in real estate, so now I am. When my children are sick, I work from home. Sometimes I work from home just because I feel like it – and those days are productive! When I’ve had a full week and my work is finished, I take the kids to the park. I go running at lunch without worrying about how much personal time it’s costing. It’s great.

And sometimes it’s scary. I still have to get used to taking a draw instead of collecting a paycheck. Sometimes it feels like I can never get away from the office. Every now and then I resent that Ryan and I talk about work so much. But I love being responsible for my own destiny, and I love that I no longer have to ask for permission to take risks or change what I’m doing.

Best of all, I work with the person who knows me best and who sees me as a whole person, not just a lawyer. Turns out, people like that make great business partners.