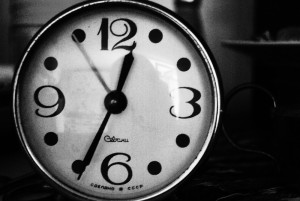 Never do today what you can put off until tomorrow.

Is that your motto sometimes?

If so, join the club. Psychologists say everybody procrastinates on occasion. And a whopping 20 percent of us are chronic procrastinators.

It seems that procrastination is a part of the human condition. For attorneys, it is stressful, inefficient and professionally dangerous.

Here is what the Model Rules of Professional Conduct have to say on the subject:

“Perhaps no professional shortcoming is more widely resented than procrastination. A client’s interests often can be adversely affected by the passage of time or the change of conditions; in extreme instances, as when a lawyer overlooks a statute of limitations, the client’s legal position may be destroyed. Even when the client’s interests are not affected in substance, however, unreasonable delay can cause a client needless anxiety and undermine confidence in the lawyer’s trustworthiness.”

Some people procrastinate because they lack self-control. Others get thrown off-course by distractions – which in today’s world of Angry Birds and Google glasses are available anytime, anywhere. And some try to convince themselves and others that they perform better at crunch time, when the heat is on. Which is usually a rationalization for poor time management.

In the law office, procrastination can be disastrous. It leads to blown deadlines, malpractice claims and ethics complaints. Even in less extreme circumstances it causes stress, insomnia and rushed, sub-par work product.

I once represented a lawyer who was in double trouble after missing the statute of limitations in a personal injury case. His client filed a malpractice claim with his professional liability carrier and an ethics grievance with the State Bar.

At first glance, there was nothing remarkable about the underlying matter. The client had been injured in a car wreck. Liability seemed clear enough: the other driver had run a stop sign. There was no time urgency – at least at the outset. Nearly two years remained on the statute of limitations. And the client said she wanted to settle quickly and get on with her life, which was music to the lawyer’s ears.

So he accepted the engagement, signed a fee agreement and opened a file.

That’s when things got more complicated.

It turned out the client had a prior medical condition that muddied the issue of causation. Stacks of medical records had to be reviewed. The adverse party alleged contributory negligence. Thorny questions of subrogation and jurisdiction needed researching.

All of which sapped the attorney’s enthusiasm. Still, the client was nice and he fully intended to get to work on her case … tomorrow. But the next day a new – and simpler – case came in the door. Followed by another and another, and soon the problematic PI case was buried under a pile of other files.

One Ducked Call Leads to Another

Eventually, the client called for a status update. Not having anything to tell her, the attorney ducked the call. She called again. This time, guilt and embarrassment were added to his reasons for not taking her call.

Weeks passed. Months. One day the lawyer looked at his calendar and saw to his horror that the statute of limitations would lapse that week. There was no possibility of a pre-suit settlement. So he vowed to put everything else aside until he had prepared a complaint and filed a lawsuit.

But by this point he could hardly bear to look at the file, much less start digging into it. Not to mention all the distractions that kept popping up. Appointments and deadlines, family matters, an overflowing in-box.

And so the filing deadline came and went with no lawsuit filed. Next thing you know, the attorney was sitting in my office with his face in his hands moaning, How did this happen?

Here’s how. He failed to adequately screen the case before accepting it. When he discovered it was stickier than he initially thought he didn’t refer it out or associate experienced counsel. He didn’t manage his work flow. He didn’t return his client’s phone calls.

10 Tips to Tame Your Inner Procrastinator

Know thyself. Experts identify three basic types of procrastinators: (a) arousal types, who wait until the last minute for the thrill of it; (b) avoiders, who fear failure or success and fret about what others may think of their efforts; and (c) delayers, who have trouble making decisions. Which type are you?

Start now. The act of beginning creates its own energy. Tackle the first tiny task in a large project and gradually pick up steam.

Think tortoise, not hare. Don’t get too far ahead of yourself. The goal is slow and steady progress.

Schedule digestible chunks of time to work on a given task. Thirty minutes or so is ideal. Concentrate only on the matter at hand – you can resume multi-tasking once you have extinguished the wildfire.

Get real about distractions. Our consumer society runs on diversion and distraction. Resist!

Strive for good, not perfect. Perfectionists are often procrastinators.

Take a nap. We procrastinate when we are tired or bored. Recharge your battery and return to the task with renewed energy and focus.

Jay Reeves has been a lawyer since 1981.Over the years he has worked as a risk manager, legal reporter and solo practitioner. For 10 years he concentrated in representing attorneys and judges in professional licensing, ethics and malpractice matters. Tales from the Liability Files are taken from actual cases he encountered over the decades. Some are humorous, others sad, but all are instructive. Contact jay@lawyersmutualnc.com, phone 919-619-2441.

One comment on “The Case of the Procrastinating PI Attorney”