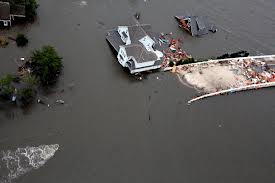 Hurricane Sandy has taught us a lot about the role of social media. Yes, we heard how in another country it helped foment a  revolution. One person’s query on Twitter tipped the world off that the assault on Bin Laden’s compound was in process. One person’s Facebook post that he’d been arrested in a foreign country got him help from the U.S. Individuals use social media all the time to help themselves or their cause or they act as lay reporters.

Hurricane Sandy was different. Maybe it was due to the enormity of the event and the massive amount of people impacted.  Maybe it was because New York City, the presumptive financial capital of the world and home to millions, was due to be hit head on. Whatever the reason, Sandy showcased the incredible value of social media as an information delivery system to 10s of millions by those charged with helping us through the crisis. Federal and local government, local agencies, public services and private companies provided timely and necessary, often critical information, through these channels to millions of people without power. Most people could only access this information through mobile devices because they had no power. This told us in no uncertain terms that the medium had taken its rightful place as a unifier, a recognized centralized emergency response center for dispatching of critical, often life-saving, information. Here are just a few examples from Facebook (screenshots): 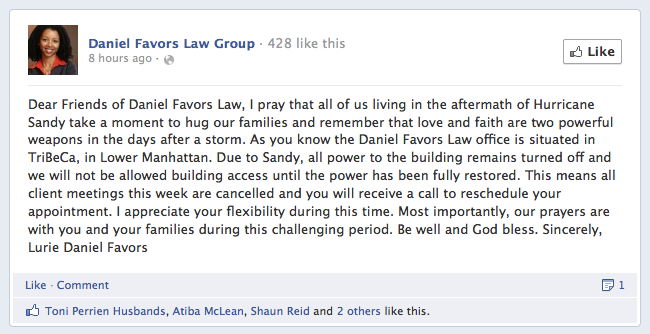 Anyone impacted by #Sandy, including homeowners, renters and businesses, should go to http://t.co/xsJ8YUsL to register for assistance.

Half as many cancellations today (13) as yesterday @AUStinAirport due to #Sandy. Check your flight status here: http://t.co/jz6SI7A8

#NYtransit update: Grand Central Terminal will reopen to the public by 2PM #sandy

If it weren’t for the efforts of Emily Rahimi, even those New Yorkers who hadn’t lost power might have been in the dark. At the helm of the NYFD’s official Twitter feed, she made contact with and provided information to those having difficulty reaching 911. Rahimi also passed along updates from the mayor’s office and urged individuals, through Twitter, not to give up on calling the emergency number, assuring those waiting that help would come.

Mayor Cory Booker himself set out across his community, driving around Newark and urging residents to be safe and remain inside. He even participated in the relocation of the city’s homeless into shelters. He used Twitter to tell people to remain indoors and to update them on the storm’s developments.

200 Statistics to Help You Wake Up

The public (your clients) are turning to social media such as Facebook and Twitter for information on how to conduct their lives in a crisis.  But if you don’t believe me here are more than 200 statistics which may change your mind.  (I’ve shared some, bolded some and you can read more by clicking on the link above.)

All of this begs the question, ‘Are you using social media in a meaningful way which begets business?’ Some of you have hemmed and hawed about creating a Facebook business page.  Some of you question the ethics of ‘friending’ clients or vice versa.  And there are issues about having your clients ‘like’ your page for fear they would be revealing they are clients.

However, is there anything wrong with creating the page, letting your clients know you do have a page and giving them the option to like the page explaining this potential confidentiality issue and then using it as an additional means of providing generalized information or more critical information in a time of crisis?  By no means should you state they must like the page and that all important information will only be dispensed there.  That’s patently absurd.  But you should know that people don’t have to ‘like’ your page to see your message.  They simply have to look up your law firm on Facebook to see what you’ve posted.  They can look up your Twitter handle and see what you’ve posted in your Twitter stream without even having to follow you.  So why not give them your social media information and post interesting relevant information they can use at all times.

The most important take away for you is to realize people are increasingly going to social media first for guidance and important information. For you to not be where they are looking can be impacting your professional relevance and ultimately your livelihood.