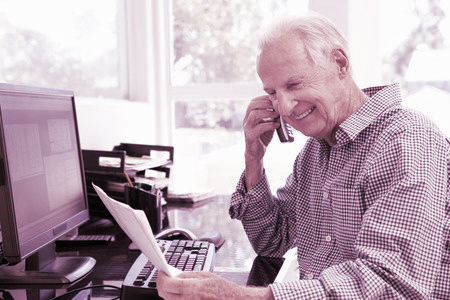 In the middle of a conversation with one of our insureds on the topic of the difficulty of learning to say no, the fine gentleman I was conversing with did a jump shift on me.  For whatever reason, he felt it was important to acknowledge that he was cognizant of his age and he wanted me to know he had taken steps to make sure he continues to practice law competently.  What really struck me, however, was his desire to also share he had instructed others at his firm to let him know if they were to ever see him start to mentally slip, because in his words “the day will come when…”

As a risk manager, I found his comments reassuring.  In my mind, he’s one I would describe as someone who is growing old gracefully.  He’s not in denial and he doesn’t appear to be fighting the aging process tooth and nail. He also has recognized that with age comes certain age-related risks and he’s doing something about that reality.  In light of this conversation, I felt compelled to take a look at a few of these risks and talk about how to responsibly manage them.

The most obvious risk with the aging process are unexpected events, for example, a medical crisis that leads to a short or long-term absence.  Should this ever occur, someone will need to step in and at least temporarily accept responsibility for your client matters. For the solo practitioner this is a particularly significant issue that underscores the necessity of having a backup attorney in place.  Regardless of your age, if you haven’t already named one, now’s the time.

Also, don’t overlook the related file status problem.  Lawyers don’t always keep files as current as they should.  I believe for many it’s a time and trust thing. There’s never enough time and just about everyone trusts their own memory.  The problem is memory isn’t as trustworthy as one ages and if you’re not available due to an unexpected event, it doesn’t matter anyway. Given this, committing to keeping the status of all files current at all times is equally necessary.

There are more subtle risks that arise as a result of the aging process itself, many of which can be quite gradual. Sooner or later everyone begins to realize that their memory, hearing, and/or sight isn’t as sharp as it once was.  I’ve heard all kinds of stories and fears.  Some lawyers have had a hard time accurately seeing everything on a computer screen. They worried about incorrectly entering critical dates or misreading what’s on the screen and making a mistake as a result. Others have struggled with forgetfulness, worrying that it’s only a matter of time before they’ll fail to show up at a hearing, miss a filing deadline, or incorrectly remember what a client’s instructions were.  And yet others have shared they have all kinds of fears about their hearing loss, not the least of which is a fear of mishearing something due to being too embarrassed to ask a client or a judge to repeat what they just said.

There are any number of steps one might take to address these subtle risks. In terms of competency, the use of checklists would be a great way to make sure nothing is overlooked.  Additional training on how to get the most out of your computer tech might become necessary, if for no other reason than this. As tech evolves so does the standard of care.  Consider prioritizing taking relevant CLE in the areas in which you wish to continue to practice.  Just because you’ve practiced in a given practice area for several decades doesn’t mean you can ignore your obligation to remain current on the impact of any changes in relevant law or regulations.  Finally, some may need to consider whether it’s time to start slowing down because the time and energy necessary to stay on top of it all is no longer there. This might mean taking on fewer matters or no longer taking on certain types of matters.  With visual issues, the purchase of a bigger monitor or having IT adjust your screen settings might solve the problem.  With hearing, it might mean finding time to have your hearing checked.  My point with all of these ideas is to encourage all lawyers to find a way to work the problem of age related risks instead of ignoring it.

A final risk worth mentioning is the comfort that can arise in long-term attorney/client relationships.  Two points to make. First, it’s important to remember that these clients are aging as well.  As clients age, their legal needs will also change.  In some way we’ve come full circle here.  It can be hard to say no to these clients; but that may be exactly what’s called for. Don’t allow long-term clients to push you into agreeing to help them on matters you have no real experience in.  Either refer this work out or do whatever is necessary to come up to speed.  Anything short of this is asking for trouble.  Second, don’t turn a blind eye to the possibility that forgetfulness or confusion may be in play with some of your older long-term clients.  Take whatever amount of time is necessary to make certain these folks understand the advice being given and couple that with a commitment to thoroughly documenting your files, focusing not only on the advice being given but the decision-making process as well.

In sum, since no one has found a way to stop the aging process, the day will come when it’s time to cease practicing law.  Until that day arrives, however, do all you can to age gracefully.  Be aware of your limitations as they arise and be open to hearing the concerns of others.  Find ways to identify your specific risks and work to responsibly address them. I say this because I have had to sit down with a few solos over the years and be the one who had to tell them their time had come.  Trust me, aging gracefully is the better choice.

One comment on “Older Solos: Since We Can’t Stop the Aging Process, the Day Will Come When…”