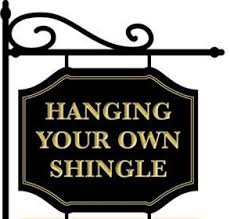 I had lunch recently with a young lawyer who has been out of work for a while. She had worked for a BigLaw firm for a couple of years before getting caught up in a layoff. Several months later, she was still searching for a law firm that wanted to hire her. She was, quite frankly, a little desperate.

I suggested to her that perhaps she needed to hang a shingle instead of sending out more résumés. ”I’m not like you,” she told me. “I can’t hang a shingle. I need a JOB. I need a steady paycheck. I don’t know how to start a firm. I don’t WANT to.”

I get it. Not everyone wants to run a business. Some people just want to work for someone else.

My sister, a pediatrician, has resisted starting her own practice for over 20 years despite being worked to death by her employers. She would rather deal with ridiculous expectations about seeing a patient every 15 minutes, signing off hundreds of charts a week, and dealing with CMEs, credentialing, insurance billing, etc. than have to manage a medical practice. I get that.

But you know what? Medical practices are still hiring pediatricians at a pretty steady rate. Law firms are not hiring at the same rate that law schools are graduating new lawyers. As my young friend noted, she went on interview after interview and still had not gotten a job offer, despite a few years of actual experience.

“I want to practice law,” she said, “but I may have to go do something else if I don’t find a job soon.”

“If your goal is to practice law, why are you waiting for someone to give you a job?” I asked. “I mean, I get it. Your goal is to work for someone else, not to start a law firm. But do you have any idea how bad it looks that you’ve been out of work this long?”

She hadn’t considered it. The truth is, when your résumé shows you have been out of work for more than a month or two, it begs the question of why you are still on the market. Indeed, as she had already observed, my young friend’s phone was ringing less and less.  “It would look better if you at least tried to start a firm. Working for yourself looks a lot better than not working at all. And you don’t have to spend a lot of money to start a firm – just a simple website and some business cards and a laptop. Besides, marketing to prospective clients is not much different from job hunting.”

Yes, I know – that’s an oversimplification of the situation. But it’s also kind of true. You do not need much to start a firm, and you do look a little like a slacker when you’ve been sitting at home job hunting instead of working for yourself.

Because working for yourself is always an option for a lawyer. Because marketing, time keeping, billing, and seeing clients are all part of the job no matter who the boss is. Because a steady paycheck is no longer guaranteed to anyone.

Anyway, that’s all beside the point. My friend’s stated goal was to land a job at another BigLaw firm. She was hung up on starting a firm as an endpoint rather than as a temporary solution to her unemployment problem.

Starting a firm can make you  more attractive to other firms looking to hire. You show that you have the chops to market yourself, that you have a book of business to bring with you to their firm, and that you weren’t waiting around for the phone to ring. Starting a firm can generate income while you look for a BigLaw job. And self-employment looks better on your résumé than unemployment. So what are you waiting for?

2 comments on “If You Can’t Find a Job, Why Do You Fight So Hard Against Opening Your Own Firm?”