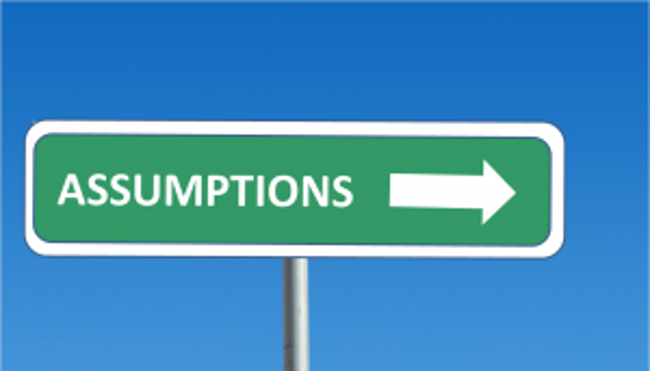 Assumptions.  We all make them on a daily basis.  In fact, as I see it, doing so allows most days to progress with some level of predictability.  For example, I often assume all my tech will function problem free, the power will stay on, and that if I need anything from anyone at the office, they’ll be available. There’s nothing wrong with my making such assumptions unless, of course, it turns out one of them is wrong and I’m not prepared to deal with the consequences. Keeping this in mind, let’s now narrow the focus and address some of the ethical missteps that can lead to trouble for the buyer of a law practice when it’s the buyer whose running with assumptions.

I’m going to start with a story that focuses on an assumption about attorney competency. Attorney Smith was in the process of retiring. He was fortunate in that another attorney, Attorney Wilson, had an interest in purchasing his practice and a deal was struck. As a result of the eventual transfer of files, Wilson’s workload jumped, literally overnight. It was then that Wilson made a decision to assume all of Smith’s prior work was accurate and correct. Wilson also assumed she would only be liable for the work she did on these new files and not for anything Smith might have done prior to her involvement. Both of her assumptions proved to be incorrect, which is what led to an eventual malpractice claim. What went wrong?

Wilson’s initial misstep was in failing to consider the reasons that might be behind Smith’s decision to retire. What if Smith’s decision was due to his being burned out? What if in the final year or so leading up to his retirement Smith’s mental acuity had started to deteriorate? In short, what if Smith wasn’t entirely competent at the end? Wilson took no steps that would help her identify and be prepared to deal with any files that might have been neglected or mishandled by Smith. When Wilson decided to accept responsibility for Smith’s files, she also accepted accountability. From a liability perspective, accountability for past work done by Smith may not be immediate, but it will come. These new clients will expect to be told of any problems in their file. As they see it, Wilson’s acceptance of responsibility for their files brought with it a responsibility to review those files. So, what should have happened?

In a perfect world, and in anticipation of an upcoming transfer of files, Smith should have created for Wilson a list of all active files.  This list should also have identified all matters that had priority deadlines. As part of this process, every file should have been updated with detailed notes setting forth the current status of the file.  Since none of this ever happened, Wilson had no choice but to conduct a thorough file review of all incoming files, even recently closed files.  Unfortunately, she made a choice to run with an assumption that “It’s all good” when it wasn’t. But wait, there’s more.

This focus on competency needs to be directed toward the buyer as well because Wilson’s misstep of assuming everything was fine on the incoming files may not have been her only misstep. When she was considering purchasing another’s practice, she should have been realistic and asked questions like these. Do I have the necessary skill set and resources (think time, staffing, etc.) to take on what’s coming?  Do I have the necessary background and experience to competently handle the types of matters, and perhaps the complexity of the work, involved on any and all incoming files?  If the answer to questions like these happened to be a “no” or even an “I’m not sure”, she should have developed a plan that would get her to a yes.

There’s no one correct approach to what should be included in any such plan.  The specifics will be determined by the circumstances in play.  Possibilities might include finding a mentor, hiring staff, the temporary use of a contract attorney, the purchase of just part of the practice (where buying only one practice area as opposed to the entire practice is ethically permissible), merging practices, having the seller enter into of an of counsel relationship, and the list goes on.  My intent here is not to set forth all the options. It’s to simply underscore the importance of coming up with a plan that would have enabled Wilson to competently and diligently handled all incoming matters in accordance with our rules of professional conduct.

This focus on assumptions about competency, however, isn’t where I’m going to stop.  For instance, it can be tempting to assume the purchase will prove profitable and that all clients will be good with the deal; but what if either or both of these assumptions prove to be incorrect? Making matters worse, if you also assume that if things don’t go as planned financially you can somehow have the new clients cover the loss, I’ve got news for you. You can’t.

Think about what our ethical rules say, in particular Model Rule 1.17 which addresses the sale of a law practice. First, the sale itself cannot be financed by increasing the fees charged on the matters being purchased.  The preexisting fee agreement, to include the scope set forth therein, must be honored by the purchaser. I don’t care that after three months in you start to realize you made a bad decision or were even hoodwinked. In almost all jurisdictions, that’s irrelevant. Second, a client’s right to discharge an attorney and have their matter transferred somewhere else survives the sale. This means that all affected clients must be notified in advance of the impending sale and they are to be made aware of the proposed sale in writing. The notice is to include the identity of the purchaser and must set forth the time frame they have to either consent to having their file included in the sale or to make a decision to make other arrangements.

Taken together, Rule 1.17 is indirectly requiring you to do your due diligence in advance of committing to purchasing a practice.  This means you not only need to understand the financial side of the transaction, to include how you’re going to pay for it; but you must also identify and address any potential conflicts related to the sale and you must determine which clients will be included in the sale and which ones won’t. And be aware that no client can be abandoned as a result of this process.  Of course, all of this must be done in advance of the sale while maintaining client confidentiality throughout.

Without a doubt, purchasing a law practice can be a smart business decision and a great way to grow a practice as long as you don’t take shortcuts and/or start running with assumptions.  Don’t make the kind of mistake Wilson made.  It’s easy to blindly believe that everything will turn out fine, to assume it’s all good; but here’s the problem. With that approach you’ll never know all isn’t good until it’s too late.