Or does it just need a defibrillator to resuscitate it?  And then a little cosmetic surgery? 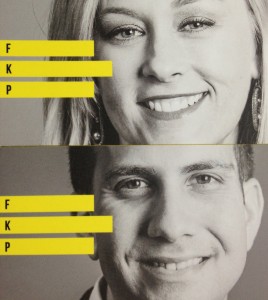 As I noted in a recent post, I went to the Kentucky Bar Association’s Annual Meeting with more than 2200 lawyers in attendance.  I also mentioned I would discuss the business cards I received.

Well, the majority of cards I received were so unremarkable they served no purpose in helping me to remember the person who handed them to me.  I certainly wasn’t going to search the internet to see if I could find more information on them hoping they had a LinkedIn account or some other memory jogger. Some were paper thin and bent in my hand. Others had the dreaded scales of justice.  None gave me any information to help jostle my memory after I got back to the office.  None had a space for notes where I could write a memory jogger of my own. For me, they were dead on arrival.

The ones that stood out and are forever etched in my mind are the new cards from FKP (Fogle Keller Purdy) out of Lexington, KY. The only reason I even met Heather Howell (pictured above) was because she was showing her new firm’s card to a fellow attendee and I insisted on having one because they were so cool.  She was a little gun shy about the new cards because they were totally unconventional by having such an up close head shot, but precisely the image her firm is looking to convey. My take away from this card is, while they may be a large firm, they are people-driven first and client-centric. If this is their message,  they are broadcasting it well with the use of contemporary photos of their lawyers.

As for pictures, when I asked the question recently one lawyer responded as follows: “The only lawyer I did remember from the event was the lawyer with their picture on the card.” I do have to say I was not as enamored of the back of this business card because, quite frankly, it was the same old same old. It begged for something ‘different’ on the back such as a statement like ‘How can I help you?’. Now, one might argue that’s solicitation.  But a business card is a ‘calling’ card.  It isn’t just an introduction, it calls for action, or it provides needed information to make someone hold on to it and then act.  But it is a start.

Lawyers should not be fearful about being different with their business cards.  Even more so today, with people using the internet to find you. If you are going to use business cards, let them be meaningful and noteworthy, both a stand out and a keeper.

And to be fair, here are my business cards: 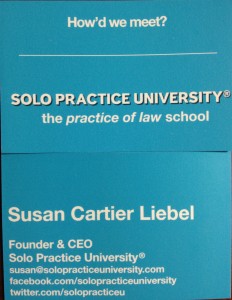 7 comments on “Is the Business Card Dead?”