Solo Practice University’s Bridges Program is just a little over two years old with several schools already participating and more preparing to provide this great opportunity to their students. And the stories of students reaping the rewards from their Bridges scholarships to Solo Practice University are starting to be told. 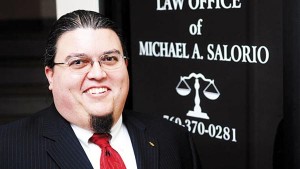 Here is the story of a Bridges SPU Scholarship recipient from University of Arkansas at Little Rock, Bowen School of Law, Anthony Salorio, as profiled in The Daily Record:

When Michael Anthony Salorio, a 2011 graduate of the UALR William H. Bowen School of Law, went home to the southern California desert to practice law, he knew he wanted to open his own practice.

He began practicing in areas – like bankruptcy and immigration – where he felt comfortable because of prior experience and course work at Bowen. But there were elements about opening a law firm that were still foreign to the former newspaper reporter and paralegal.

“I had a plan before I ever went to law school,” he said. “I wanted to establish a practice out here and exploit the professional networks that I built up during my reporting days. My goal was to be a successful small-town practitioner in a small rural county.”

What’s even more impressive about Anthony is how he understands intuitively what he needs to do in order to make his solo practice work:

“I have to do everything for myself,” he said. “It feels great to be my own boss because no one but myself tells me what to do. But with that privilege comes a lot of responsibility. It’s totally different from when I was a reporter or paralegal because I’m the attorney of record – the buck stops with me.”

Salorio is also using more than his networking skills to promote his business. Out of 10 clients, nine are Hispanic. He counts his Spanish fluency and willingness to work with Spanish-language media as an advantage. His familiarity with technology is serving to be a competitive advantage as well.

“I integrate technology as much as possible, but I don’t buy something for just the bells and whistles, or because it’s new,” Salorio said. “My office computer network is totally wireless, and I use a Square reader with an iPod to accept credit card payments. I print my own postage, which saves me trips to the post office, and I run as much of a paperless office as I can, and I conduct almost all of my legal research online. ”

Salorio knows it will take several years to be able to make a good living from his firm. He feels the sacrifices are worth it – just like his hard work when he was a student at Bowen.

You can read the full article here.