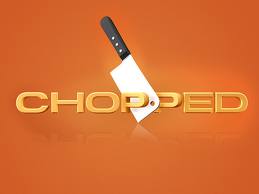 My son and I are a frenzied fans of the show ‘Chopped’ on the Food Network.  In brief, in every episode four chefs come together in a cooking competition before a panel of judges.  In progressive elimination  segments the chefs are each given the same basket of four basic ingredients which they must combine to produce one unique dish to be judged based upon the following criteria: use of ingredients, taste, and presentation.  The one major criteria is transformation of each ingredient into something different. The one who is the least successful in terms of creativity, presentation and technical skill in each round is eliminated. The first round is the appetizer; then entree, then dessert round where the two remaining chefs battle it out to be ‘Chopped Champion’ and receive $10,000. The chefs can be executive chefs, sous chefs, caterers, seasoned, newly-minted, male and female.  Some have more formal training than others. Others are up and coming.  They all have the same small amount of time to use these basic four ingredients to produce a masterpiece. Sometimes seasoned chefs are defeated by impassioned new chefs because they are so incredibly creative and turn their ingredients into something wonderous and never contemplated by the judges.  Other times the seasoned chefs are just unstoppable.  The point is:  they all start with the same ingredients and no two results are the same based upon the unique skill, passion, cultural background and training of each individual chef.

So what does Chopped have to do with forms companies like RocketLawyer and LegalZoom and solo practitioners?  Much more than you realize.  (hint: this is a marketing lesson)

When you fear forms companies, you are fearing that clients will go to a forms superstore believing getting a form is comparable to hiring a lawyer.  When you are fearful you dismiss these potential clients as DIY’ers, tire kickers, cheapskates. But this is the equivalent of accepting that clients simply want a box of pasta, a bag of green beans, a stick of butter, and eggplant.  And you are accepting they will somehow magically know how to whip these ingredients into authentic tasty meals with all the nuanced flavors, herbs, additional special ingredients that make gourmet food the amazing experience it is. Or you believe they will screw it up and they get what they deserve eating pink slime burgers from McDonalds.  The reality is the majority simply can’t whip up a gourmet meal nor do they understand they are eating pink slime.  The majority are simply unable to resolve their own legal problems.  Yet these forms companies have convinced them that while they have no clue what to do, they will in fact get a great meal by just purchasing the forms.

Similarly, a forms company can only sell legal forms in their most basic state just like a box of dried pasta.  There is no experience attached, no nuance, no interpretation of the facts and the law to help a potential client with their legal problem the way an experienced practitioner familiar with their legal problem, precedent, the courts and local procedure can bring to bear.  The purchaser of forms is buying the hope of a gourmet meal but being told to create it themselves without understanding the first thing about cooking.

It is up to each and every lawyer to help potential clients recognize this major distinction between a forms company peddling boxed pasta and hiring a lawyer to do the actual cooking.  Forms companies can only defeat you if you buy into the idea law is just about basic ingredients and not the creation of a unique legal service based upon all the ‘other’ ingredients and experiences you bring to the kitchen.  It’s up to you to educate those who require legal services that forms are just boxes of pasta sitting on the shelf, not gourmet meals finessed for the specific legal problem they have. And to continue the analogy (because I’m so caught up in it), it’s up to you if you want to be ‘Chopped’ as a solo lawyer by these very same forms companies.  I know – a little hokey but I hope I’m making my point.

Don’t be afraid of forms companies.  Use them as your muse, your own grocery store for basic ingredients, your sell against,  showcasing precisely why your clients need a lawyer who knows how to create an authentic and unique gourmet meal.  Your job is to educate them.  If you don’t, forms companies will win (and the client loses)….simply because you let them win.