This was written by Attorney Frank Guertin, a North Branford, CT practitioner who has no website I can find.  He is not on LinkedIn, Twitter, or Facebook :-)  He has been a columnist for the Tototoket times  writing ‘Let’s Be Frank’ for as along as I can remember – a maximum 10 page local paper, his column positioned next to ads for local businesses, plumbers and electricians and articles on town ice cream socials, library bake sales and board of education briefings.  This tribute appeared in the May 6, 2011 edition of the Totoket Times, reprinted from 2010. I can’t link to the column because the paper is not online. If after I contact him to get ‘official’ permission to keep this blog post up and he declines, it will be taken down. I’m trusting since he shared in the local paper without visible copyright by either himself or the local paper that just maybe it will be OK with the proper attribution provided above.

“I was orphaned more than fifteen years ago when my mother passed away.  Thirty nine years old was too soon to be left without the guidance and understanding only a mother can give.  My mother was a terrible person who in today’s society would be sent to jail. 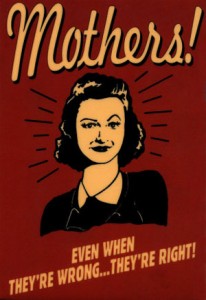 When I did something wrong, she wasn’t afraid to hit first and ask questions after.  IF for some reason I was later found innocent of the crime her sense of fairness was to let me know she would be more lenient the next time I really did something wrong.

Growing up, low grades in school were not tolerated.  It wasn’t enough to just try.  Work without results was just a waste of time.  If you studied for four hours and didn’t get a “A” you should have studied for six.

When I complained about working and going to school, she didn’t tell me to lighten up on my load, she just taught me how to manage my time better.

When I used foul language, she never rationalized that it was the language of the times. She washed my mouth out with soap and that was the lesser of the punishments involved.

If I didn’t like the food she made for supper, there were no alternative menu items.  You ate what was cooked or you didn’t eat at all.

She never accepted the old adage that kids would be kids.  Times were only changing because the adults were letting them change.

When I misbehaved in school or disrespected my elders, she didn’t tell me how stupid those people were or make a scene in school because her ‘baby boy’ was being abused.  She told me that in life you had to figure out how to overcome hurdles and deal with all types of people, especially your superiors.

When it was time for the talk on sex education, there was no diagrams or books to read.  She simply told me to keep my hands to myself and if she found out that I was doing “something wrong”, I might lose a certain body part.

We didn’t get our driver’s license until we were eighteen.  It didn’t matter if all the other kids had theirs.  Working since I was twelve, I was able to buy a car before I had my license.  That was OK because my father needed a car anyway.

There were no large TVs or gym memberships.  If we wanted exercise, we could run around the block or take out the trash.  Speaking of trash, we didn’t take it out when we were ready, we took it out when my mother was ready.

Yes, my mother was terrible.  She would never cut me slack and never let me get away with anything.  She taught me to fend for myself, knowing that she was always there to set me straight should I stray from the path. She taught me that good values and morals should never be compromised.  She taught me that tough love was a very difficult task but the results were worth it.  She gave me the guidance to settle down with someone who would be the best mother my kids could ever have.

She just didn’t get it, and I’m so glad she didn’t.