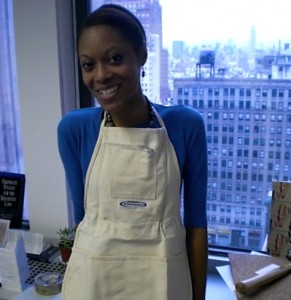 All faculty acknowledged the entrants in the Proud To Be Solo Scholarship Contest were incredible and every single one worthy. But when the final votes were tallied, Tracie brought home the most votes in a nail-biter finish.

Tracie C. Robinson is a May, 2008 graduate of George Washington University Law School who passed the July, 2008 New York bar exam. She then immediately began her 1 year clerkship in St. Thomas, U.S. Virgin Islands. Upon completion, she moved back to New York City to ‘pursue her dream of opening a solo practice.’

“Being a lawyer is a noble profession. When you work for yourself (as a lawyer), there’s just no reward which can compare.”

The second reason solo practice is for her:

I’m impatient. I didn’t want to wait three years for someone to trust me enough to allow me to interact with my first client. I really just wanted to jump in…

A big part of Tracie’s mission is being an active part of the legal community, devoting a percentage of her practice to pro bono work and contributing to the community at large.

Tracie already shares a small office in Tribeca with another solo, steps from several court houses with the Empire State Building shining in the distance.

She has already taken on several cases (both paid and unpaid) and is reading everything she can get her hands on to further her education. She wants to ensure she doesn’t make any ethical missteps. She is also a self-professed Continuing Legal Education junkie who can’t wait to have 24/7 access to Solo Practice University’s more than 400 classes.

Already showing her wisdom she laughs,

I’m Proud To Be Solo…. but not too proud to seek out all the help I can get!

Click here to see the more than $12,000 she has won in cash, services and products to help her create and build her solo practice!

And if you would like to learn more about Solo Practice University, the #1 web-based educational and professional networking community for lawyers and law students who go solo, check us out here.

20 comments on “The Proud To Be Solo Grand Prize Winner Is….”