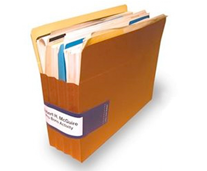 You’ve just been through some very intense contract negotiations for a new client and now that things are wrapping up, this client thought the time was right to let you know that once your work is complete, you are to turn over everything in your file. In short, you’ve just been informed you are not to retain anything relating to this matter.  As a risk guy, I now have serious concerns. If you comply, how in the world could you defend yourself in a subsequent malpractice claim?  Remember, the client will have complete control of the file.  Admittedly, this kind of situation doesn’t happen often; but it does happen.  So, let’s talk about your options if you ever find yourself in a similar pickle.

ABA Model Rule (MRPC) 1.16 Declining or Terminating Representation is where we need to start.  Although paragraph (d) states that upon termination of representation the lawyer is to surrender papers and property to which the client in entitled, it also goes on to say “The lawyer may retain papers relating to the client to the extent permitted by other law.”  Even more interesting is language in MRPC 1.6, the confidentiality rule.  In short, a lawyer may reveal confidential information in order to establish a defense in a controversy between the lawyer and the client. One could infer from the language of this rule that a lawyer has every right to retain a copy of every client’s file in order to have the ability to establish a defense.  Finally, there is no language anywhere in the Model Rules that would prohibit a lawyer from maintaining a copy of every file.  One can thus conclude that a lawyer may retain a copy of the file in spite of a client’s explicit instruction not to.

That said, I can certainly understand there may be situations where a request to not retain anything is reasonable.  Perhaps there is a concern over making sure that highly confidential information remains highly confidential, something along the lines of the formula for Coke for example.  Still, if you comply with the request we’re back to the how do you defend yourself problem, which begs this question.  Could you ask for a release of liability in exchange for turning over everything in your possession?  This is where it gets interesting.  Often lawyers will answer no, arguing that the rules of professional conduct prohibit this; but do they?

The answer lies in MRPC 1.8(h).  Under this rule a lawyer shall not “make an agreement prospectively limiting the lawyer’s liability to a client for malpractice.” [Emphasis is supplied.]  Since there is no similar prohibition regarding matters that have been completed, it would appear that a lawyer may indeed ask for such a release, although depending upon who the client is, the client should be advised to seek independent advice about the advisability of signing such a release.  Think about it.  If this weren’t the case, how could anyone ever settle a malpractice claim?

Of course, there may be times where the client has no intention of signing a release and no intention of letting you keep a copy of the file, if for no other reason than the client is just one of those “high need for control/power play” types.  Now it’s decision time.  You certainly could acquiesce, but I would strongly recommend that you don’t.  As I see it the only real choice you have is to tell the client that in spite of the client’s wishes, you will be retaining a copy of the file in accordance with our ethical rules and let things settle out as they may.  Worse case scenarios are you lose the client and move on or the client tries to take some action against you such as filing a bar complaint. But again, think about it.  If the client’s only complaint is you kept a copy of the file over the client’s objections, the chance of a successful outcome for the client is low to nonexistent as I see it.