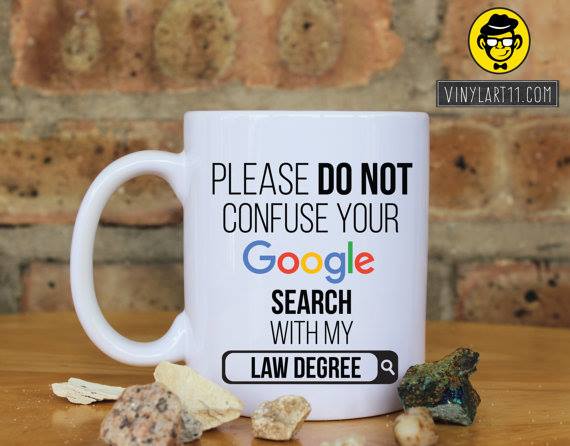 The recent group coaching session was called ‘Don’t Confuse Your Google Search with my Law Degree’. The title speaks volumes because it also sets the tone of the conversation. You’re annoyed at this person who takes up your valuable time telling you everything they already know about their case because they did an ‘extensive’ search on Google. You think they are just there to confirm what they already know by picking your brain for free then walking out the door. You are convinced they are determined not to hire you.

Do you even want to waste your time trying to convince this person they need you as their lawyer?

The answer is simple. Yes. Why? Because this person actually lacks full confidence they have the answers or they wouldn’t be sitting in your office in the first place. What you need to do is park your attitude and preconceived ideas at the door and approach this potential client very differently.

First, very few potential clients come to any lawyer today completely uninformed.  They’ve done a google search on their issue, tried different search terms, read blogs, message boards, even fortune cookies to figure out how to move forward.  The last thing they really want to do is hire you but they are not 100% convinced they shouldn’t.  It’s nothing personal.  Some will have done a cursory search and quit when they’ve gotten confused and, instead, just start searching lawyers.  Most lawyers like these potential clients.  But more and more are doing in-depth searches trying to assess if it is a matter that is 1) worth pursuing on legal grounds 2) if it’s worth pursuing on legal grounds, is it worth pursuing financially, and 3) if the answer to #2 is in the affirmative, can they represent themselves?

This is what you are up against every day.  We’re going to focus on #3.

This person is convinced they have a case that is worth pursuing and after their search, they are 80% – 95% convinced they can represent themselves.  This is the Google Scholar.

So, how do you convert the Google Scholar?

Understand that the Google Scholar doesn’t know what she doesn’t know.  She’s only researching the biased facts she feels are relevant to her case.  She’s only searching for support for her half-understood legal position.  She keeps finding pseudo-facts to bolster what she believes is right and she’s even righteous about it.  She’s read blog posts, message boards, talked with her friends, maybe even someone with a similar case who was represented by a lawyer, was charged a ‘fortune’ and that friend said she could easily have done what the lawyer did at no cost. After all, she’s smart and the lawyer didn’t really do much. She’s never once looked at the law (or the appropriate law) governing her partial facts. She’s never once researched the arguments against her position because it’s not important to her. And now she believes she can represent herself.  But there is still a niggling doubt so she looks for a lawyer she can bounce her ideas off of to confirm that she is on the right track. Then she can pursue the matter on her own and save a ton of money representing herself.

Yep.  Just who you want walking in the door.  But the truth is, this isn’t a hard sell if you understand how to approach it.

First, you still have to do your job.  Have her present the facts of her case as she knows them.  Guide and listen without interruption or judgment as you should be doing anyway. Once she’s told her story, she’ll probably let you know she’s also done some research on her own (or maybe she’ll play coy so you should ask her the question directly). Tell her it’s pretty cool she’s done this.  You like a client who wants to actively participate in their legal matter.  Thank her for being so proactive.  Then ask her what she’s learned.  Let her talk.  Let her share.  Let her even preen a little (even if inside you’re going ‘Oh My God!  She’s missed the most important issues and you are tempted to interject and let her know she knows nothing!).  This will probably be the hardest part.  But you need to do it. Take notes for later.

Once she’s done, tell her she’s done a great preliminary job.  Then get to business.  Ask additional facts, the ones she’s maybe conveniently failed to mention because it doesn’t support her bias or her position.  Ask her if she did any homework on the multiple laws which may apply.  Ask her if she’s familiar with case law that does or does not apply in her favor or against.  Let her know, while she’s done an amazing job, there is so much more to understand (and not in a condescending way).  That’s why you appreciate that with everything she’s learned she was still wise enough to seek out counsel.  This is what you do for a living. It’s your job to know all the angles, all the details, all the laws, etc.

This is how you handle a Google Scholar.  You will be consulting with more and more of them.  You’ve got to stop meeting them with condescension and derision and start drawing them in with understanding and appreciation for their efforts. They’ll hire you.  More importantly, they’ll evangelize you to all their friends, those same friends who thought they could do it on their own, too.  Those same friends who will appreciate they now know a lawyer who values the legwork they’ve done, their partnership, their Google ‘scholarship’.