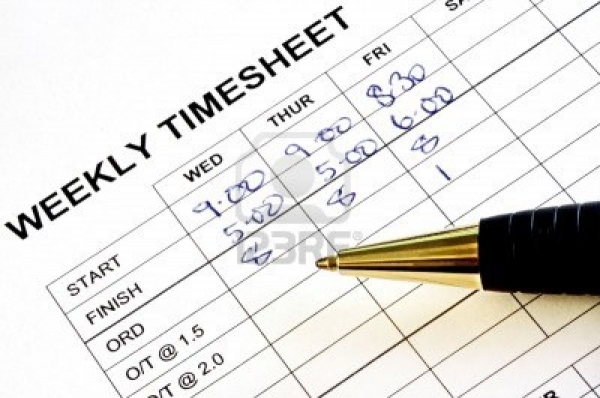 This post is directed toward those of you who fail to accurately record your time on a consistent basis throughout the day, day after day. I know it can be a hassle but there are really good reasons why this should be a priority.

Now I could start lecturing and talk about the studies that confirm lawyers tend to under bill by 10–15 percent if they wait until the end of each day to record their time. In fact, for those who procrastinate even more, the under billing numbers get worse. The reason for this is you simply don’t remember everything you did or how long it took if you fail to record your time contemporaneously. Trust me, over the course of a year, the income being lost as a result of under billing can be real money; but I digress. Truth be told, I’ve found this lecture approach tends not to motivate people to change. So this time I’m going to share a story, a story that exemplifies how sloppy time records really can cost you more than you might think.

Jack and Diane were divorcing. Jack hired an attorney at a small firm, a firm that had a lower profile because it was new. Diane went with more of a hired gun, one of those high powered lawyers at a big name firm in town. You know the type. Thankfully the lawyers were able to do their jobs well. The matter settled on the eve of trial, the high costs of which had been successfully avoided. In fact Diane’s lawyer even commented to Diane’s father that “I did not bother to prep for the trial because I know it will settle”. Everyone was happy, at least for now.

Throughout the course of representation, Jack’s lawyer, the small firm lawyer, kept meticulous time records. His final bill was detailed and reviewed for accuracy prior to being sent. The final bill Diane received from the high-powered law firm was much higher than anticipated and no detail was provided. Diane’s happiness about avoiding the sky high costs of trial proved to be short lived.

Jack and Diane were still friendly because they shared two children.  Diane asked Jack if he would share his lawyer’s bill with her.  Jack agreed.  He asked his lawyer for another copy of his bill. He stated that Diane was concerned about the bill she received due to the lack of detail. Her bill simply read “Dissolution – $18,000.” Jack provided Diane a copy of his bill so she could review it. She suspected Jacks’ bill would be lower by perhaps a third due to her awareness of the rate each lawyer had charged. Once she got it however, she was shocked to find that Jack’s bill was close to 2/3rds less. This is when Diane decided to contact her lawyer and ask for a detailed line item breakout of her entire bill.

I took a while but Diane was finally given a bill with the requested information. Immediately her attention was drawn to a line item which stated ‘eight hours trial prep’ at $350/hr. for a total of $2,800. Apparently Diane’s lawyer had forgotten about the comment he made to her father the day it all settled! Upon further review of both bills, Diane discovered additional discrepancies not only in deposition time but much more. In the end Diane filed a formal grievance against her attorney and never paid her bill. Ouch.

While we’ll never know what Diane’s lawyer was thinking when he drafted his detailed bill, one can surmise that he had not contemporaneously made time records to refer to. Without a doubt he felt he needed to do all he could to justify his fee. Not only would estimates have to do, he would need to rely on his memory in order to detail the actual services delivered. Now, as tempting as it is not to, I’m going to give Diane’s lawyer the benefit of the doubt and assume he actually did do eight hours of trial prep for a divorce. It just wasn’t Diane’s divorce! This doesn’t surprise me in the least. I mean how could anyone accurately remember all that has happened in each and every open matter weeks or even months later, including comments made to others in passing? When it comes to time and billing, memory doesn’t cut it.

This story underscores the value of contemporaneously made time records; but time records aren’t just about making sure you can legitimately bill out for all you do. They also enable you to comply with our ethical rules. Rules that mandate the fee be reasonable and the bill be truthful and accurate. But there’s more. Let’s even put the lost income and any fallout from the disciplinary matter of this story to the side. Referrals and repeat work are the bread and butter of most legal practices and that’s tied to reputation. It can take years to build a solid reputation and minutes to destroy one. Jack and Diane will tell their story just as I have here. Unlike me, however, they will use real names and word will get out. The reputation of both lawyers and firms will be impacted, just in different ways. Remember, what we’re really talking about is your desire to place someone else’s money in your hands. Play fast and loose in your effort to earn it and you risk having your client feel cheated. When it comes to money, being cheated out of it leaves a really bad taste in one’s mouth. I needn’t say more.