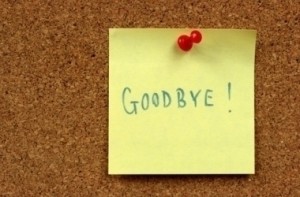 One of the issues I was concerned about the most when I decided to go solo was how to leave the firm I was working for. It was a small family owned firm and I had grown close to everyone there. Despite my reasons for leaving and any problems I may have had with them it was important to me to be professional and leave on good terms.

I think I stayed a little longer than I should have because I really didn’t know how to tell them that I was leaving. I still wanted to have a positive relationship with them when I left and I didn’t want to burn any bridges. So I reached out to my network for tips on on how to leave on good terms, and the advice I received really helped me through the transition in a way I felt comfortable with.

Know What You are Going to Do Next

Before I gave notice I had already signed my lease for my new office and I knew when I was going to start. This helped me immensely because it forced me to stay on track and not delay my plans to resign.

Talk to Your Boss

The most difficult part of the entire experience was actually telling my boss I was leaving. She had a difficult year due to some medical issues and we had grown close. But I knew it was best for me to move on, but that didn’t make it any easier for me to tell her I was leaving, especially since she cried. While I did write a resignation letter, I knew that talking to her about it in person was the most respectful way to do it. At the end of our discussion I handed her the resignation letter for my file.

My biggest error was giving way too much notice. I wanted to help make the transition as easy as possible so I gave a months notice instead of two weeks. In hindsight, it was not a great idea. For one it was just really awkward. The longer I was there the more uncomfortable it got for everyone. And after the second week I wasn’t mentally invested in what I was doing there. If I had to do it over again two weeks would be my limit.

Have A Plan on How to Transfer Your duties

I had an overwhelming amount of responsibilities in my position, and I did not want the clients to suffer during the transition so I put a lot of effort into transferring my duties. I met with every client to let them know I was leaving and to update them on the status of their case and left detailed notes on each file for my successor. They were able to hire a new attorney prior to my last day so I had a few days to get him up to date on what needed to be done.

Overall I believe I handled my departure in a very professional manner and did everything I could to leave on good terms. Despite all of my efforts I think the firm was still a bit bitter and upset that I left. I think I went above and beyond what was required of me so I was very comfortable with how I left.

Have you left a firm?  What advice would you give to someone considering doing the same?