(Let me preface this with the following:  This is not a political post.) 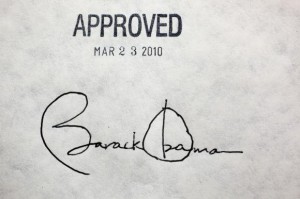 Regardless of your position on the Affordable Care Act (ACA), there is one undeniable truth.  More and more lawyers will be going out on their own and one of the biggest deterrents to doing so has been the inability to secure health insurance for themselves and their families.

We’ve been acutely aware of the health coverage issue facing solo/small firm practitioners and from the first day we opened Solo Practice University.  We had one mission which has failed.  We wanted to get a group health insurance policy for students enrolled in SPU because we knew many solos were unable to get health insurance coverage due to pre-existing conditions (which could be as minor as hypothyroidism which costs pennies a day to control with generic medication or as complicated and costly as being a cancer survivor).

Getting group health insurance was the number one request we had except for those in Massachusetts. We talked with our then SPU professional liability insurance provider who was an insurance broker.  We gathered the relevant data so he could shop around to health insurance providers. He was very clear up front; there had to be enough of a mix of young and healthy to balance out older with pre-existing conditions in order for it to be worthwhile for the insurer.  First, our student enrollment in our early years (by industry standards) was too small. To compensate for this we tried to piggy back on the shoulders of another legal group to see if combined we could get health insurance for both groups.  This proved unworkable.

Finally we got interest from two carriers who were willing to investigate a group health insurance policy for SPU students.  When we finally submitted the information required we were given a strange explanation for denial – we were ‘untried’.   Well, any new group is untried.  The end result is we couldn’t accomplish this goal.  Eventually, we stopped trying as we knew the ACA was passed into law and would be in effect soon.  It was slightly nightmarish to say the least.

However, if you are banking on employment-based health insurance, understand a declining percentage of the population has health care through employment.

The percentage of Americans who receive health insurance through employers has fallen significantly over the last decade—from 69.7 percent nationwide in 2000 to just 59.5 percent in 2011, according to a report by the Robert Wood Johnson Foundation (RWJF).

With the economic changes going on in this country, the rise of freelancers and overall self-employment, getting employer-subsidized insurance will be harder and harder to come by.

Companies are increasingly relying on freelancers to help deal with the rapid pace of change and innovation in the global economy. The Labor Department’s recent monthly jobs reports have shown that companies are focusing less on longer-term hires and more on filling short-term needs and hiring part-time workers. Essentially, employers are adapting a “just-in-time” model for staffing.

More importantly, with these same economic changes the legal field, which has always had a disproportionately higher rate of self-employed than other professions, may very well see  more of the ‘just-in-time’ staffing model happening in Big Law firms. One could argue it’s already been infiltrating law firms in the form of short term document review contracts, collaboration between firms on special projects and even the Axiom model.

Temporary Experts. Freelancing is no longer the domain of hourly contractors and programmers. Companies are now finding they can fill critical and often high-level skill gaps quickly with freelance workers. According to the Tower Lane survey, “75% of companies surveyed use freelancers because they need a wide range of specialized skill sets at different times.”

But, back to health insurance: Lawyers who despise their Big Law jobs stay in these jobs because they can’t get health insurance for their families or they have a pre-existing condition which is covered by their current employer’s plan.  And even if they have a spectacular employer-subsidized health care plan, or what the industry calls a ‘cadillac plan’, get ready for it to change or contributions to be greatly increased. For those who are eligible to purchase individual policies, cost is often a deterrent for the individual. Many simply opt to take their chances they will remain healthy and not have an accident.  If they do have a disabling event, bankruptcy is always an (unpleasant) option.

As of today, the ACA is the law of the land.Those SPU students who have historically been unable to get health insurance will have the opportunity.  Those who are in jobs they don’t want to be in anymore can carefully extricate themselves from their current positions to proactively compete in the legal marketplace. We even offer two full courses on the subject: Freelance Lawyering 101 with Kimberly Alderman and Footloose and Fancy Freelance Lawyering with Celeste Boyd.

Solo Practice University didn’t create this changing legal market.  But we certainly are making every effort to help you navigate through it!

And on another note, we are pleased to announce we have created a new State CLE Credit Requirements page so you know exactly what you need to do and when to do it to maintain your law license!

Bookmark this page for future reference and consider getting your CLE credits through SPU while learning how to create and build your solo/small firm practice.