This post is not for the faint of heart. Nor is it a political post.  It is a cold hard look at statistical data (which I’m sure you can supplement anecdotally) on what is happening to wages in this country.  And what a (potential) client earns directly impacts the route they will take to address their legal needs.

Unless you live under a rock or walk through life with your ears covered and your eyes closed singing la-la-la. you would be hard pressed not to know there is staggering unemployment in this country.

The National Employment Law Project has just released very sobering statistics. According to this report, 58 percent of the jobs that have been created since the end of the recession have been low paying jobs.  Let’s define a ‘low paying job’. The National Employment Law Project defines it as a job with an hourly wage between $7.69 and $13.83.  If you were working a full time job, with full time hours for an entire year, your annualized earnings at the top end of this range would be $28,766.40.  To put things in perspective, the federal poverty level for a family of five is $27,010. It’s fair to say that these newly created jobs don’t pay what is required to support a traditonal middle class way of life.  In fact, it is swelling the ranks of “the working poor”  and increasing the number of Americans requiring government assistance. 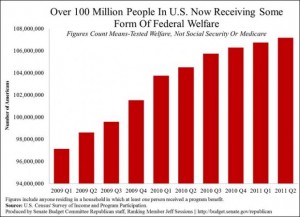 More startling are these numbers compiled by the National Employment Law Project .  During the recent recession, most jobs lost were mid-wage jobs. Most jobs created since then have been low wage jobs. This alters our economic landscape dramatically. Here are some highlights from the report:

-58 percent of the jobs created since the end of the recession have been low wage jobs paying between $7.69 and $13.83 an hour.

The numbers at the higher end of the mid-wage pay range are not that uplifting, either.

You can conceivably support a family of four in some, or even most, parts of the U.S., but it’s fair to say you will be living at the lower end of the middle class life style.

But the most important take away is this: A full 80 percent of all jobs being created are paying $43,950.40 or less and the number of ‘good’ jobs (currently at less than 25%) is declining, too.

This is the financial future of most of your clients, the very clients who will need your legal services more and more as life continues to get incredibly complicated.

The reality is slowly hitting the majority of people: workers in this country are no longer valued.  Less and less are receiving health care or retirement packages.  So, of this top range of $43,950.40 pre-tax, these workers will have to pay for their own health care as well as figure out their retirement.  How are they going to squeeze out dollars to pay a lawyer for that estate plan or to defend that DUI or handle their divorce or incorporate their fledgling business or protect their trademark?

This is the fundamental reason LegalZoom and their ilk are poised to make a serious land grab.  It is why large box stores like Walmart could be positioning themselves to provide legal services.  It’s why there is such a battle royale going on to prevent non-lawyer investors from entering the legal space. Big money is in tune with demographics and economic changes in a way that our profession is not.  They explore every area to compete and increase their market share and profit and they don’t care who they steamroll over to do it.  The legal space is incredibly vulnerable because of the ‘we’re a profession and not a business’ slogan which is mentally tattooed on almost every lawyer over 35.  The ‘business’ models are old, top-heavy and the resistance to change is legendary. Those educating future lawyers are guilty of the same.

The Need For Legal Representation Is Not Disappearing. It’s Increasing

The need for legal representation is not disappearing.  In fact, it’s necessity is increasing.

The increase in self-represented parties stems from a recession that has left fewer people able to afford lawyers and created new waves of foreclosure, debt collection and bankruptcy cases, judges and lawyers say. Judges say self-represented people are slowing down court dockets because they typically don’t know what legal points to argue or what motions to file.

But the traditional business models are terribly flawed. The traditional delivery costs are no longer supportable in this post-recession economy.  They say your services are only as valuable as those willing (or able) to pay for them.  This well is drying up.

What Can You Do To Compete?

As I’ve written here, don’t fear the forms companies.  Right now these companies still lack what you have to offer IF you handle your business properly and make inroads in educating consumers on the difference(s) between them filling out a generic form and you providing counseling and advocacy and guidance through the legal thicket.  Consumer Reports also confirmed that legal forms websites were no match for professionals . We still live in a society where the majority of consumers believe they need a lawyer for legal services even though they struggle to pay the legal bill.  Right now you are still relatively safe from the the known forms companies because they have yet to fully realize their own shortcomings and do something meaningul about it.

However, there is a new beast on the block.  Maybe others didn’t hear the alarm bells ringing when this news came out, but I find this new venture by Jacoby and Meyers more threatening than the LegalZooms of this world could ever be.

Because Jacoby & Meyers is a law firm, it offers not only customer service, but will also have lawyers available to provide legal advice about the legal forms that they sell, giving the firm a competitive advantage.   Many consumers and small business owners do not seek out the legal services they need because they’re afraid it’s too complex, confusing or unaffordable.  “This expansion is all about giving the public, especially average citizens and small businesses, access to affordable, quality legal representation,” said Len Jacoby, founding partner of Jacoby & Meyers.

There is a huge difference between LegalZoom and their kind and what Jacoby & Meyers is doing.  Forms companies make their bread and butter from selling forms.  Harnessing a stable of usually low-priced lawyers to answer questions and maybe garner a client or two isn’t there main selling feature but an add-on.  They attract the DIY crowd who avoids using a lawyer even though they might need one content with what they don’t know until it’s too late.  This leaves a huge gap unfilled between the full-service lawyers and the DIY’s. J&M has created a strategic relationship with USLegal Forms. As a result, they will have access to thousands of forms, offering three choices: a do-it-yourself option, an attorney consultation option and a full service lawyer/client option. As a business that is fully lawyer-owned, J&M can offer legal advice structured in a way that other companies that are non-lawyer owned cannot.

In addition, J&M is starting out as a national law firm with an incredibly well known brand, a serious marketing machine and claiming they are:

America’s largest full service consumer law firm with more than 130 offices nationwide, and we have lawyers available to practice in all 50 states plus the District of Columbia and hundreds of lawyers.

They are adding on legal forms to their already existing fully fleshed out full service law firm.  They are now positioned very well to capture the clients who have pre-determined they can’t pay for full service but want the safety of knowing if they buy forms and need them reviewed or they screw it up there is a known law firm attached to that purchased form.  They can get help. This client perception combined with the power of the J&M marketing machine and their national reach is by far more threatening to solo and small firm lawyers who cater to the consumer than the LegalZooms of this world.  J&M also doesn’t have to deal with non-lawyer investors at this point, either.  They’ve jumped the hurdles others are facing and did it with a single strategic relationship and reengineering of their business plan.

This is the real carnivore consumer lawyers need to fear (even if their website is atrocious).

But it’s not all doom and gloom. When J&M was just J&M sans legal forms, they didn’t own the consumer legal arena.  And when they start marketing their forms business nationally all consumers won’t be flocking to work with them. They can have their big piece of pie and still leave a nice slice for you.

What do you need to do?

Look at your current business model and see how it needs to be reworked to cater to today’s economically-challenged client. J&M is offering three ways to work with their firm; 1) Use their forms, 2) Use their forms and meet with an attorney on a consulting basis and 3) Full service.

When you look at your current practice areas and how you have structured your services, are you offering a comparable way for potential clients to work with you? Do you have more than one way a client can retain your services? Are there different fee structures for different levels of service?  Can you (and are you willing to) create this type of structure? Can you create this type of structure AND make it affordable to the client while still earning a living? Are you willing to pivot?

These are the questions you need to ask yourself.  And you need to start now. There is still time.  Just because we are watching the birth of the legal behemoths doesn’t mean there isn’t room for you to grow. They are still in their infancy. Understanding what you are up against and accepting it is half the battle.  Addressing the issues head on and acting upon it is the critical next step.