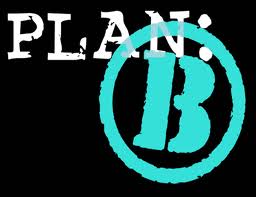 The key to your life is how you deal with “Plan B.” You can aim for Plan A. You can arrange for Plan A. But “Plan B” is what actually happens to you. It’s your resilience in being able to roll with the punches and move on to “Plan B” that really makes your life. If something doesn’t work out, you can’t automatically think that something bad has happened. You never know why things happen the way they do, but that’s life. That’s how it unfolds. When faced with “Plan B”, don’t feel you have to be dragged kicking and screaming into it because, sometimes, “Plan B” is so much better.”  ~ Marilu Henner

I happened to be reading an old interview with Marilu Henner on Healthy Happy, Life - just some Saturday morning non-legal internet surfing –  and what she said about “Plan A” and “Plan B” was articulated so beautifully because it applies to the majority of us.  My whole life has been “Plan B” and in hindsight, I wouldn’t change a thing.    I was also talking with a friend this past week who asked for advice because she was basically ‘sucker-punched’ at work and it was upending her goals for the next three years.  We talked about how she immediately had to shift into ‘Plan B’ which was just speeding up the steps for where she had intended to head instead of waiting. It also included a possible period of unemployment and not of her own choosing. By speeding up her plans, she has to maneuver financially but ultimately it is where she wants to go.  So, now she’s changing her attitude about what is currently happening and finding a way to make it work for her, gaining back some control of the situation and moving forward. This is a typical “Plan B”.

Such is the situation with many lawyers.  They go into law school expecting it to lead to a certain life-style or professional accomplishments or any number of things they’ve written into their life script called ‘Plan A’.  They lay out the road map, seldom considering the obstacles and then they get sucker-punched.  Some of the double-fisted wallops right now, though, especially the economy combined with student loan debt, make it hard to regain ones breathe. This is factually undeniable.  Gen Y is responding to this crimp in their “Plan A” by putting off home buying. Putting off car buying.

“This is a generation that is scared of commitment, wants to be light on their feet and needs to adjust to whatever happens,” said Zukin, who’s researched the effects of the recession on recent college graduates. “What once was seen as a solid investment, like a house or a car, is now seen as a ball and chain with a lot of risk to it.”

Even younger kids are stressing about the high costs of education and of life:

“Three of four students ages 14 to 23 have ‘some’ or ‘major’ concerns about how they’ll pay for college, according to a new study released Wednesday,” Fox News reports. “Students in college aren’t the only ones feeling the financial stress. The survey of 1,500 students by the Horatio Alger Association included kids as young as 14 and found that they had major concerns about paying for higher education.”

Many law graduates continue to believe their “Plan A” is to be employed by another.  It’s compounded by the continued pressures and seeming unrelenting prejudices of the profession drilling home the idea you are incapable of practicing directly upon graduation. It’s time for many of you to realize that if you want to practice law you will have to reframe your thinking. ”Plan B” may very well include working another type of job, or freelancing, and starting a solo or small firm practice, or any combination of the above.  It requires creative thinking, not defeatist thinking. It requires you to avoid those who just want to commiserate and, instead, surround yourself with those who want to problem-solve and get creative with you.

You also need to take the Gen Y attitude reflected above, putting off large purchases and adopting a mentality of frugality. Then apply the same financially creative thinking when you are building your solo or small firm practice.

Clearly there is much to consider and one size does not fit all. The most important consideration is your goals…and the alternative to you not achieving your original goals.

If through desire or simply no feasible alternative, you will be starting your own solo practice, there are always low-to-no-cost resources to help. Yet, it isn’t just about cutting costs and growing slowly professionally.  It is also about adjusting your lifestyle to keep costs down. This will give you a chance to make your practice work financially.  That’s the hardest part, tightening the belt all around if necessary.

The other important strategy is realizing you don’t need to have everything (all the ‘trappings’ – see the word ‘trap’ in there) of a lawyer until your business is ready.  We are an impatient society believing we have to have everything now or we can’t do it.  It’s all or nothing. Let go of this mindset and allow yourself time to grow into your practice, buying as you need to in order to take your practice to the next level, just as Gen Y’s are renting and leasing homes and cars versus taking on the responsiblity of a home or car payment.  You’ll make smarter choices, spend your lmited resources more wisely, allow yourself to stay nimble and fluid, and learn how to first survive, then live, then thrive as a solo practitioner, if this ultimately ends up being your ‘Plan B’.

“Plan B” isn’t about ditching the dream.  “Plan B” is about achieving your goals in a different way than you anticipated, and possibly in ways you never would have expected.  They say life is a journey and to enjoy the ride.  So is your professional career. Remember:

“When faced with Plan B, don’t feel you have to be dragged kicking and screaming into it because, sometimes, “Plan B” is so much better.”

3 comments on “When Your Life Turns Into ‘Plan B’”