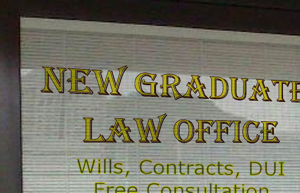 Please welcome Solo Practice University’s newest columnist, Douglas Greenberg, who will be writing about his experiences going solo.  In this first post of a five-part series, he will be discussing how he built his practice.  Having seen his columns already, I know you’ll enjoy and learn from what he has to share.

It all begins with the decision to start your own law practice. For many attorneys, this is the most difficult part of the entire process. As human beings, we are always influenced by the expectations of others, and lawyers are no exception. So, becoming a solo is difficult because it feels like a departure from the herd.

When I first entered law school, I had the same general definition of success as most of my classmates: Get into a big law firm, make a large salary, bill lots of hours. I don’t know, maybe join a country club. There were a number of other career options that presented themselves over time. But starting a solo practice certainly wasn’t one of them. As far as career options went, it just wasn’t something that was talked about. The subject seemed almost taboo. I sought general advice numerous times from career services, but I cannot remember a single instance where they so much as mentioned the possibility of becoming a sole practitioner. And this was at a law school that was particularly well-resourced, with many externships, training opportunities and almost constant brown bag lunches. Not one of these extracurricular items was ever devoted to solo practice. Becoming a solo just wasn’t something you were expected to do.

And those expectations weren’t confined to the legal profession. Truth be told, my wife and mother thought I was crazy when I told them I had decided to go solo after putting in some time working firms of various sizes in the San Francisco area. Having invested so much time and money into law school, they acted as if I was throwing it all away. Meanwhile, even I had doubts, even though being my own boss and having complete control over my cases appealed strongly to me. Personally, I wondered if my former colleagues would view me differently. Would they still respect me, even if I was no longer working at an established firm?

Ultimately, I figured that if a colleague stopped respecting me without an affiliation with an established firm, the relationship wasn’t worth preserving in the first place. And I still had the support of my family (if not their complete understanding). I felt that if I didn’t at least try it, I would always look back and regret it. And now that I have done it, I can say that I am alive and well, here on the outside.

Indeed, it has made me realize some things about myself and given me experiences I would have never had otherwise. During the years that I ran with the herd, I was always trying hard to fit in. I tried to be what I thought others wanted me to be. So, I’m happy I gave up traveling with the herd. Today, I do the work that I love to do and I do it on my own terms for my own clients. I make a good living and get satisfaction from doing it. I’m helping people, and I’m doing it all on my own.