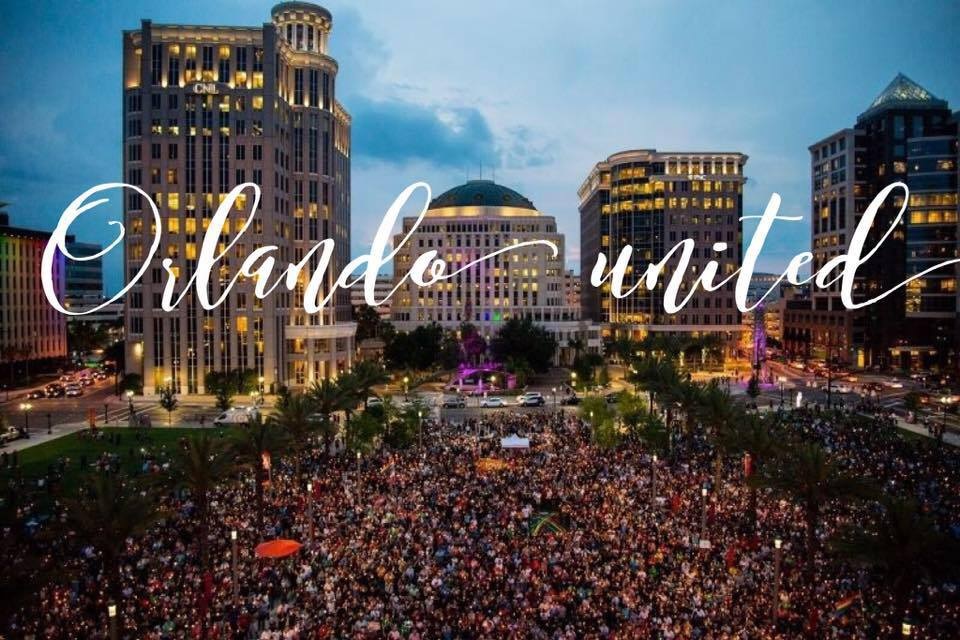 I’m sitting here reflecting on this past weekend in Orlando, Florida. My home. Saturday morning we woke to the news of the brutal murder of Christina Grimmie, a young, talented singer, following a performance. We were shocked. Stuff like this just doesn’t happen in Orlando. We thought things couldn’t get any crazier.

Then Sunday morning we got the news that Omar Mateen, a 29-year-old U.S. citizen, had opened fire at a local gay nightclub, killing 49 people and leaving another 53 wounded.

The details are grim. Mateen planned it. He called 911 and gave credit to ISIS. He was a Muslim, but he frequented Pulse, a popular gay bar a hundred miles away from his home. He may or may not have been gay. He allegedly made both homophobic and racist comments at work previously, and touted his ties to various terrorist organizations. In truth, there appears to be no connection between the gunman and any organized Islamist extremist group. He was a U.S. citizen of Afghan descent. His father said he was “upset” about seeing two men kissing in public. He bought the guns he used just a few weeks ago. He chose Gay Pride Week to launch his attack, and it was Latin night at Pulse, so the club was filled. He walked around after opening fire, going back to injured bodies to make sure that he had in fact killed the victims. He took hostages. He shot at police and they shot back. Suicide by cop. By now you’ve seen the photos and names and photos of the deceased and many of the surviving victims. They were mostly gay, Latino, and male. Forty nine people are dead, including the gunman. Fifty-three injured. One-hundred two victims. One homegrown terrorist.

I attended a joint meeting organized by the Hispanic Chamber of Commerce between Hispanic and LGBT community leaders. Both communities are hurting right now. Families and friends are grieving. An entire city is devastated. But the pain extends its fingers into Hispanic and LGBT communities all over. LGBT people have been persecuted for generations, but this attack struck in a place where they felt safe to be themselves. Some lost their partners, their husbands, their wives, their friends. To say the Orlando gay community is reeling from the attack is an understatement. Hispanic families from all over the globe are arriving to claim bodies or stand by bedsides. They need support: airfare, lodging, translation services, legal services, counseling, money to pay medical bills and to pay for funerals. The devastation has no end.

Be certain of this: this was not about morality or religion. This is about the gunman’s fear, homophobia, racism, and hate. This is about scaring people into a violent reaction.

But I watched Orlando react very differently. Hundreds stood in line for hours in 92º heat just to donate blood. Those who couldn’t donate blood served those in line with umbrellas, food, and water. Our first responders reacted with speed and compassion. Our hospital workers pulled shifts that lasted more than 24 hours. Local surgeons worked around the clock. Orlando Mayor Buddy Dyer choked up over what he called Orlando’s “most difficult day.” City Commissioner Patty Sheehan called for calm and for us to come together in love and peace. Thousands poured into Downtown for a sunset vigil to honor the victims. I’ve hugged more strangers in the last 48 hours than I have in my entire life.

I watched the lists online as friend after friend checked in to say that they are OK. I realized just how many friends I have that could easily have been at Pulse that night. Like the rest of America, I watched the names list grow as families were notified. I am relieved that, so far, I don’t know any of the victims personally. Nonetheless, the loss feels personal.

I’ve seen comparisons to 9/11 and Boston. I know that our tragedy is exactly the same, and that it is completely different. Terrorism marks cities in similar ways. There is a villain. There are heroes. There are victims. There is a community rallying together.  There is senseless loss. But this time, it did not take place in some distant city that I mostly know from the news. Not in Kansas City, New York, Washington, or Boston. It took place in the city that everyone all over America (and all over the World) comes for vacation. Orlando, the Happiest Place on Earth. It happened in my home.

Our legal community in Orlando has just started to rally. We are helping with translation services for victims’ families that don’t speak English. We are helping with immigration services for victims’ families that don’t reside in the U.S. We are volunteering pro bono hours in family law and probate (and if anyone should need it, in business law too). More than that, I’ve seen so many of my legal colleagues make personal donations, give blood, go to vigils, and give their time to support the first responders, the victims and their families. We are doing what we can, what we know how to do.

The terrorist did not win. We are #OrlandoStrong. We have #OrlandoPride.

If you are looking for ways to help, go to OneOrlando.org and give.