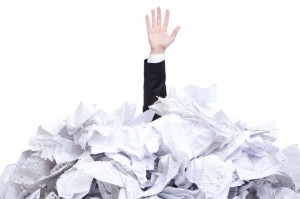 According to Wikipedia, Chaos Theory is the mathematical study of “dynamical systems that are highly sensitive to initial conditions (such that) small differences in initial conditions yield widely diverging outcomes…  rendering long-term prediction impossible in general. … In other words, the deterministic nature of these systems does not make them predictable.” In other words, it’s the “Butterfly Effect,” where a butterfly flapping its wings on the African Sahara ultimately has a causal effect on the weather in San Francisco.

In the practice of law, think of it this way: the legal secretary calendaring court dates – correctly or not – can be deterministic on the outcome of your client’s case. In running your business (law firm or otherwise), it’s about controlling your processes.

My desk is chaos right now. A million little events that led to this moment in my law practice have resulted in a pile of bills and receipts here, a stack of phone messages there, and mounds of client files everywhere. We are in the middle of migrating to a new practice management system, I have three court deadlines looming in the next week, and I’m stressing about productivity, marketing, cash flow and everything that it takes to run a business.

Sound familiar? It’s not just clutter. No, chaos is a product of our working lives. We make it. We control the initial conditions and we therefore control the ultimate outcomes. As my software programming professor would say, “Garbage in, garbage out.”

Applying the concept of Chaos Theory to my desk, then, I can see that the madness started with a single act. I let one piece of paper sit on my desk as I put off taking care of the task it presented  - a phone call to return, a letter to respond to, a bill to be paid, or a document to be filed. And then another piece of paper – and another task – piled on top of the first one. Then another and another.

This isn’t mere procrastination. I have turned “being busy” into an art form. These were the million little things that seemed less important than whatever I was working on at that moment. Now, all those tasks I put off are turning into a million little fires I need to put out.

Every business management class or book you read will tell you that systemization is the way to better productivity and less chaos. But which systems? And what happens when you outgrow those systems? Or when you realize that you’ve become inefficient and non-productive in spite of your systems? What happens when chaos creeps back in?

I am learning about the “12-Week Year” concept right now – basically, it’s the idea that you plan your business on a quarterly rather than annual basis – and there may be something to it. By shortening the cycle in which you plan and do your work, you deal with the chaos potentially created on a shortened cycle too. You are accountable for what works and what doesn’t on a 12-week cycle, so your systems get tweaked every 12 weeks instead of every 12 months. You shorten the time from butterfly-flapping-its-wings to making-it-rain-in-California.

For this to work, it seems to me, you have to look at your law firm’s workflows: marketing, client intake, initial consultation, engagement, production, follow-up, and disengagement. Examine where you are more or less efficient, what the process looks like from the client’s perspective, and where you and your staff are spinning your wheels.

Look at what you did last year, and decide what worked and what didn’t. What would you do if you had to shorten that year to a 12-week period? What wouldn’t you do? Knowing you cannot reasonably accomplish everything in that shortened time period, how would you narrow your goals?

On my list of things I would do: I’d focus my marketing time on the referral sources that resulted in actual revenue generation. I would place a stronger emphasis on client-driven deadlines. I would focus on client communication.

If we distill our processes down to what actually works, eliminating the things that create chaos instead of productivity, we might just get more done in a shorter time frame. That’s the idea, anyway, and it is at least intriguing.

Another methodology I am learning to apply is the “OHIO” principal. “OHIO” in this case refers not to our 17th State, but is an acronym for “Only Handle It Once.” OK – no, you cannot literally only deal with things immediately. Some things do require that you come back to them, often multiple times. Just don’t put off dealing with things.

Whatever you are tempted to set aside, take care of it now before all of your uncompleted tasks turn into towering piles on your desk. Handle it, schedule it, or delegate it. And if you really can just deal with it later, maybe you shouldn’t be dealing with it at all.

This goes back to the notion in Chaos Theory that if you control the initial conditions of a process, you control the ultimate outcome. It is similar to the 12-Week Year concept in that you shorten the cycle for dealing with problems. You deal with everything as close to now as possible. You won’t have as many fires to put out if you never let things smolder.

Now if you’ll excuse me, I’m going to clean my desk.