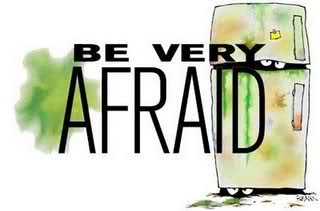 This post might be a story about preserving client property.  It could be about spoliation of evidence or the importance of communicating with staff.  Or, it might not have any lesson at all and I’m sharing just because it is my favorite claims story.

An office refrigerator-freezer can be a scary place.  Moldy leftovers, stolen yogurt, ancient ketchup bottles, frosted-over microwave dinners.  For attorney Julie Clary* it was also the source of a malpractice claim.

Clary was retained by Jesse Shields* to represent him in a personal injury claim.  Shields ordered a delivery pizza one night after work.  As he watched TV with his girlfriend, he took a bite and broke multiple teeth on a hard object in the pizza.  Shields immediately inspected the object and discovered that it was a metal bolt.  He called the pizza place to report what had happened.  He also took pictures of the pizza and bolt.  Shields was a savvy client and understood that the pizza needed to be saved as evidence, so he returned the slice and the bolt to the box and placed the box in his freezer.

Shields did not waste any time in retaining counsel.  Within a few weeks, he met with Clary and she agreed to represent him in bringing a claim against the pizza chain.  She made contact with the corporate office and then with an insurance adjuster hired to handle the claim.  After preliminary settlement negotiations were unsuccessful, the adjuster requested that Clary send the pizza to the insurance company for testing.  Clary met with Shields at his home, retrieved the months-old frozen pizza, took it to her home, and stored it in a freezer in her garage.

Clary requested additional information from the adjuster about the nature of the testing he wanted to perform.  This went on for a few months.  Clary received conflicting information about whether the entire pizza was needed or just the bolt.  She was reluctant to let the evidence out of her custody and pressed the adjuster for assurances about how the testing was to be handled.

Eventually, almost a year after the incident, Clary transported the pizza to her office and placed it in the freezer.  A month later, she went back to the freezer to get the pizza and it was gone.  Clary had no idea what happened to it or when it went missing.  Clary thinks she put a note on the box but cannot recall what it might have said.  She shares office space with a group of realtors, along with her own small staff.  She questioned everyone, but no one knew what had happened to the pizza.  The most likely explanation is that the pizza was thrown away during an unannounced refrigerator clean-out.  There is also a remote and horrifying possibility that a hungry office scavenger had a meal of a year-old pepperoni and bolt pizza.  Clary contacted the office cleaning team and checked the building’s dumpster.  The pizza and bolt were never recovered.

The insurance adjuster for the pizza chain continued to insist that he would not consider any settlement until the pizza was turned over for testing.  Clary put together a package including Shields’ dental records (his bills totaled about $2,500 for crowns and examinations), photographs of the pizza and bolt, and affidavits from Shields and his girlfriend.  The pizza company refused to budge.  At that point, Clary had to weigh her options:  file a lawsuit based on the evidence that was available or settle the claim with Shields herself to resolve the matter.  She was certain that the defendant would raise arguments about the absence of the pizza and bolt, and this would make the case somewhat more expensive and difficult than it would have been otherwise.  The situation also raised conflict of interest issues.  Could Clary proceed with the representation in light of Shields’ potential claim for malpractice?  Could she fully and fairly advise him in settlement negotiations when a settlement would benefit her interests by eliminating the malpractice claim?  Would she become a witness as to what had happened to the evidence?

Ultimately, Clary offered to settle the case for $3,500 and Shields accepted after being advised of his right to consult with independent legal counsel.  This brought the matter to a close without a formal claim or the expense of litigation.

The mystery of the pizza was never solved, but your suspicions that the office refrigerator is scary or that your officemates will eat anything could be correct.  Beware that your leftover chili and your critical case evidence are both at risk.