You can and should read I Hate Being the Client. You Should Know Why (Part 1) to understand this follow up. 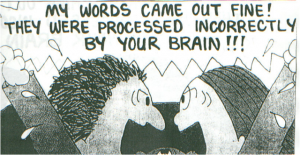 Just when you think it is safe to go back in the water, round two of attorney/client miscommunication hits.  We, the plaintiffs, haven’t even filed our lawsuit yet and it is just one amazing miscommunication screw up after the other.  And before you say to yourself that you would never do this, these lawyers are awful, and this is not how your office is run, remember, these lawyers not only came highly recommended from others we trust who have used them successfully, but I have used one of the lawyers before very successfully and without a single complaint.

MORAL: A strong referral is great as an opportunity for you to gain a client predisposed to liking and trusting you.  However, it is not a free pass for you, the lawyer, to rest on your laurels and not prove you were worthy of the referral.

As of the last post, when I thought our first miscommunication was resolved, we have had another huge communication break down and one questionable practice.  To refresh your recollection, there are five plaintiffs.  We last left off at the conclusion of the initial client(s) meeting with the attorneys.

Now the saga continues. Post client/attorney meeting, the first retainer agreement was mailed but to only one plaintiff, our designated point person and it only required his signature.  In effect, it was simply a retainer agreement between him and the law firm. None of the other plaintiffs were mentioned.  I immediately pointed out to our point person that not only did this give him unilateral decision-making power, but it effectively made us not part of the lawsuit AND made him solely liable for all legal fees.  It took another round of conversations to get this resolved and after a month we received a retainer agreement listing all the plaintiffs. It also specifically states he does not have unilateral decision-making power for the group.  Why do I bring this up?  Because during the initial meeting all the plaintiffs designated a point person solely for ‘communications’ between the lawyers and the group  so the lawyers didn’t have to talk individually to five different plaintiffs.  But this is not what the lawyers heard nor did they seek to clarify. This seems to be an on-going issue.

Next.  Our initial group meeting was the end of February.  One week after signing the proper retainer agreement on June 5th and providing a retainer of $2,000, we receive a bill for $2,050.  The invoice indicated this was for research done the first week in March. Our initial reaction was this must be a clerical mistake because it was research unrelated to our case (in fact, it was on ‘all fours’ with a case they are doing for another firefighter), and was done one week after our initial meeting and months before a retainer was signed by all the parties.  In addition, the invoiced work and dollar amount was in direct conflict with a statement made by the female partner who said, ‘once we have a signed retainer we will do preliminary research for X amount of dollars and I’ll throw in my review of the research for free.’  X amount of dollars was considerably less than the bill and this bill indicated four hours of her time at her hourly rate of $400 plus an additional six hours of research by her associate.  It simply had to be wrong.

Needless to say, the first reaction of the plaintiffs was to question why we were being billed for research done before we even signed the retainer agreement. They also were familiar with the other firefighter’s lawsuit so this raised a few eyebrows. The second thought was why did we receive a bill that was in direct contravention of the conversation had with the attorneys?  But here was the kicker.  When our point person called the office and questioned if the $2,000 retainer was being used to satisfy the bill and we just owed an additional $50, he was told it wasn’t.  The original $2,000 received with the retainer was to be held in escrow, kind of like a security deposit, in the event we don’t pay our bills. We now needed to produce another $2050.  I’m sorry. I’ve never heard of taking a security deposit against potential non-payment.  Second, and most importantly, this requirement/practice is not stated anywhere in the retainer agreement and it never came up once during our discussion of fees.  But worse than this, when questioned about the rationale behind this suspect practice, the explanation included some nonsense that they had been stiffed by another ‘group’ and they didn’t want to be stiffed again.  This was for their protection.

At this juncture our point person is calling me and saying the other plaintiffs want out.  This is so confusing to all of them and he’s at a loss to understand what is going on.  These are not stupid people.  These are people who have not been communicated with properly and the lawyers are in their own world wondering why we don’t understand what they are doing and causing them such grief. The point person’s  frustration level is very high, he feels devalued as a client, even made to feel stupid and we haven’t even really gotten started with the attorney/client relationship.

Again, you may say you would never be in this situation, that your communications are clear and memorialized in your retainer agreements.  But I ask you to ponder this.

So, what happened?  I had to personally contact the lawyer I have a relationship with and lay out point by point our concerns, the areas of miscommunication, this ‘security deposit’ which was never discussed and makes no sense and is unacceptable, the bill for the research which was done long before a retainer was signed and in direct contravention to what was discussed, and to let him know the other plaintiffs are completely frustrated with the way this is being handled and it’s going to fall apart if something isn’t done.  They agreed to go to this law office to work with HIM specifically, to communicate with HIM directly because he happens to also be a lawyer/firefighter and speaks their language. The plaintiffis simply do not feel comfortable dealing with the ‘office’ or the woman attorney.

How would you handle the next steps as the lawyer representing this group?

3 comments on “I Hate Being the Client. You Should Know Why. (Part 2)”