Last month I attended a new type of conference created by Lee Burgess and Alison Monahan called Catapult2013.  I have to admit I originally agreed to be a speaker because I hadn’t been to San Francisco in decades and it was a good excuse to see an old college friend. I’d lost faith in conferences a long time ago because they seem to be regurgitating the same things over and over, again.  Maybe I’m jaded.  Maybe I haven’t been to the ‘right’ conferences.  However, it’s my opinion and I’ll stick to it until someone proves me wrong.

I also wanted to participate the same as many other speakers did because the idea behind this new conference is important – to empower those with legal degrees to think outside the box instead of being stuffed inside the overcrowded airless box the legal profession has unfortunately become.  It really was about breaking free from the traditional stereotypes of what a lawyer should be and instead imagining all the possibilities of what a lawyer can be.

So, with this in the back of my mind you could well imagine how pleasantly surprised and totally inspired I felt starting right from the cocktail hour the evening before, through the conference itself, and still today. It was fantastic.  And here’s why it was fantastic.

Both Lee and Alison work with current law students through The Law School Toolbox and The Girl’s Guide to Law School. Therefore, they are much closer to the thoughts and feelings and concerns of current students and recent graduates studying for the bar exam as well as those out a year or so.  This conference was in response to their needs, their concerns, and therefore the speakers were selected to not just educate the attendees but also to inspire and help them develop confidence as new legal professionals.  This is no easy feat.  In fact, it’s seldom addressed at any conference.

Next, the speakers were not the usual fare.  There were actual solos taking front and center stage on the marquis!  In addition, there were BigLaw defectors, authors, counsel from Google and eBay and more.  However, the highlight (at least for me) was the legal entrepreneurs like Dave Raynor: Founder of Accelerate Legal, Raj Abhyanker of LegalForce, Neal Gorenflo: Co-Founder and Publisher of Shareable, April Rinne: Chief Strategy Officer of Collaborative Lab, and Nick Aster: Founder of Triple Pundit.

The panel I was most intrigued with was this one:

Emerging Issues in the Sharing Economy

Some of the most exciting and disruptive companies to emerge in recent years are part of “the sharing economy.” Think collaborative consumption, crowdfunding, peer-to-peer marketplaces, AirBnB, RelayRides, alternative corporate forms, and so on.

But as the sharing economy goes mainstream, the legal issue are proliferating. From complaints about AirBnB users not paying hotel taxes to questions of liability when someone crashes a car they rented for an hour, it’s been a wild ride.

Here is a brand new area of law that is fraught with legal issues, any one of which a daring lawyer can jump into and get in front of the crowd. Their enthusiasm for what is happening in this space was electric and they really demonstrated to the attendees that the legal world is a wide open space if they will just will step forward.

(One a separate note, in keeping with being different…the lunch was to die for! So was the dessert.)

On top of the great education the conference provided, the organizers really worked hard to facilitate connection and they succeeded admirably.

It was also a great opportunity to meet one of SPU’s sponsors, Cathy Sargent from LMIC. 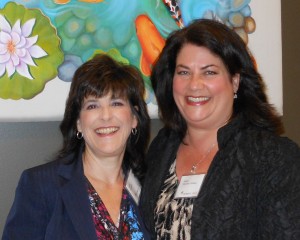 Bottom line: everyone who went there is pushing them to organize an east coast version of Catapult this coming fall.  You can check out a photo collage of the day here. If they do organize another conference, I’ll be there.  And so should you!