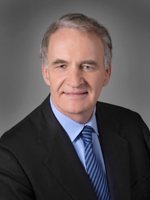 Kendall Coffey is a founding member of Coffey Burlington, PL, concentrating on complex litigation at trial and appellate levels in federal and state courts. He provided a guest lecture on ‘Spinning the Law:  Trying the Case in the Court of Public Opinion’ on Tuesday, December 14th.

From 1993-1996 he served as the U.S. Attorney for the Southern District of Florida, one of the nation’s largest federal prosecution offices. Thereafter, he had major litigation roles in such high profile cases as the Elian Gonzalez international custody battle, and the 2000 presidential election recount. A legal media commentator on high-profile cases, he has appeared on the Today show, Larry King Live, the O’Reilly Factor, Good Morning America, the CBS Early Show, Anderson Cooper 360, Fox & Friends, CNN International, and numerous other nationally televised programs.

Mr. Coffey has recently authored Spinning the Law: Trying Cases in the Court of Public Opinion, published by Prometheus Books. Over the years, he has written some three dozen articles on legal topics in publications ranging from the Yale Law and Policy Review to the Wall Street Journal. He also teaches law as an adjunct professor at the University of Miami, School of Law, and has lectured for The Florida Bar, The Academy of Florida Trial Lawyers, Dade County Bar Association, Professional Education Systems, Inc., National Business Institute, Inc. and CLE International, Inc.

What You Will Learn:

This guest lecture is about 64 minutes. Listen directly below.