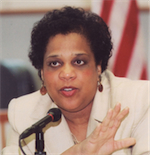 Sonia R. Jarvis is an accomplished scholar whose research and teaching focus on race, public policy, and the media. She will teach a course called “Nonprofits and the Law: Start Up Basics” at Solo Practice University®.

Sonia is currently a Distinguished Lecturer and the Director of the Baruch College Center on Equality, Pluralism and Policy at the School of Public Affairs, Baruch College, City University of New York. She first joined Baruch College as the Lillie & Nathan Ackerman Visiting Distinguished Associate Professor of Equality and Justice in America responsible for teaching and developing programs to engender a thoughtful dialogue on issues of race, equal justice and ethnicity. A graduate of Stanford University (with B.A. degrees in Political Science and Psychology) and Yale Law School (J.D. degree), Sonia is an accomplished scholar whose research and teaching focus on race, public policy, and the media.

Sonia has extensive experience in both the private and public sectors including her solo private law practice in Washington, DC that focuses on civil and human rights, nonprofit organizations and small minority businesses. Her litigation and counsel experience has encompassed corporate clients, civil rights leaders, music and media executives, and pro bono cases. Additionally, she has provided leadership on policy and governance issues to a number of non-profit organizations in various roles as manager, general counsel, and board member, including the National Coalition on Black Voter Participation, Inc., where she served as its Executive Director as well as her past positions a Senior Consultant to the President’s Initiative on Race during the Clinton Administration, and as past president of the Black Women’s Agenda. She is a frequent commentator on public issues and has been interviewed by almost every major media outlet in the country, such as National Public Radio, the Washington Post, and CNN. She is currently engaged in research and writing about the interaction of race, media and politics, and the urgent problem of lack of access to higher education by minorities, low income families and immigrant youth.