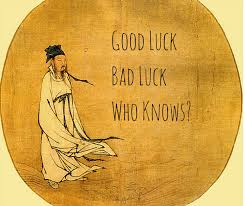 About a week later, the horse returned, bringing with it a whole herd of wild horses, which the Taoist farmer and his son quickly corralled. The neighbors, hearing of the corralling of the horses, came to see for themselves. As they stood there looking at the corral filled with horses, the neighbors said, “Oh what good luck!” The Taoist farmer replied, “Maybe.”

A couple of weeks later, the Taoist farmer’s son’s leg was badly broken when he was thrown from a horse he was trying to break. A few days later the broken leg became infected and the son became delirious with fever. The neighbors, all hearing of the incident, came to see the son. As they stood there, the neighbors said, “Oh what bad luck!” The Taoist farmer replied, “Maybe.”

At that same time in China, there was a war going on between two rival warlords. The warlord of the Taoist farmer’s village was involved in this war. In need of more soldiers, he sent one of his captains to the village to conscript young men to fight in the war. When the captain came to take the Taoist farmer’s son he found a young man with a broken leg who was delirious with fever. Knowing there was no way the son could fight, the captain left him there. A few days later, the son’s fever broke. The neighbors, hearing of the son’s not being taken to fight in the war and of his return to good health, all came to see him. As they stood there, each one said, “Oh what good luck!” The Taoist farmer replied, “Maybe.“

According to Taoism, the true significance of events can never be understood as they are occurring, for in every event there are elements of both good and bad. Furthermore, each event has no specific beginning or end and may influence events for years to come.

Life is all about perspective. Expectations, I have found, do more harm then good. If our expectations are too high we will always be disappointed because we don’t allow for unplanned opportunities. If our expectations are too low, we may never strive for greater things.What’s rocking our world today and the worlds of those we love, family and friends, are just current circumstances. And circumstances change by the minute. What impacts ever-changing circumstances is how we view them and how we act in the moment and going forward. Do we roll with the punches, go with the flow? Or do we absorb every punch and kick until we are knocked out, fight the tide until we are exhausted and drown or simply live our lives dodging bullets? Or a combination of the three?

With the proper perspective it may very well be the birth of opportunity.