One of the things that being a solo has allowed me to do is to expand my network of professional women. As a result, I helped form, with my  good friend Heather Lam, a group known as the Grown Ass Woman Brigade (or “GAWB”). As you might guess, the GAWBs are a bunch of gals with chutzpah and a strong sense of humor. They are, by and large, professional women from all walks of life and all races, ages, shapes and sizes.

GAWB started as a purely social outlet: my friend declared that it was nice to have other “grown ass women” to talk to. No drama. No fuss. We decided that we needed to introduce our grown ass woman friends to one another, and set up a meet-up at a pizza parlor. After that, we set up a Facebook group for GAWB. Before too long we had a network of over sixty women. GAWB took on a life of its own.

This month the GAWBs had our coming out party: the Red Dress Ball. The GAWBs were in fine form! Many of us were in red ball gowns. There were several that came looking like a 1940′s pin-up. A few came in corsets and motorcycle boots. One even came dressed in an Elmo costume. 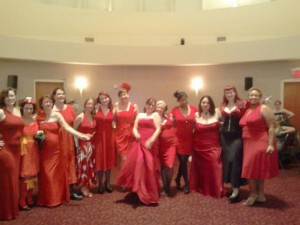 Some of the GAWBs at the Red Dress Ball

The event got massive support from local businesses and the Orlando theater community. We ate, drank, danced, talked, laughed, watched musicians and belly dancers, introduced our husbands and significant others to each other…. and raised more than enough money to get the non-profit off the ground. Next month, we will have our first official GAWB seminar, with GAWBs who have achieved success teaching and mentoring other GAWBs. One of the most powerful thing about the GAWBs is that they do not take themselves so seriously all the time. That seems to foster mentoring and support and growth.

It’s just a bunch of women helping other women.

It’s different being a woman in our profession. In particular, there is still a huge disparity between men and women on the partner track at Big Law. Don’t get me wrong – I deeply respect my male colleagues and cherish their friendship. They have a LOT to teach me! But the Boys Club is still there, and that’s just a reality.

As I’ve mentioned before, I had a career before going to law school as a systems engineer (read: I was a computer geek). Specifically, I worked as a database specialist for various software companies and even had my own consulting business. In that world, all that mattered was how well I did my job. There was zero – ZERO – difference in how I was treated by my boss and my co-workers because I happened to be a female.

The real shock came when I graduated from law school. For the first time in my career, I encountered sexism. My boss, a “Guy’s Guy” if ever there was one, played basketball with the male associates, and took them to lunch once or twice a week. He took a genuine interest in their careers, their lives, their well-being and future success. He did what he could to teach them what he knew. He gave them work that would help them advance in the firm, and taught them how to bring in business.

In three years, the boss took me to lunch once – in the firm’s cafeteria – and that was when he offered me the job as an associate. When I would try to schedule lunch with him, he would cancel every time. I finally gave up on lunches, and worked to just get face time with the boss. He didn’t go for that either, and only saw me to discuss work product. Over time, he quit even doing that, speaking to me primarily through email, even though my office was next door to his.

I was not singled out. I watched him do it with all of the women in our department. One of us finally badgered him into including her (and only her) in the lunches with the boys, which he did only once or twice and then stopped. None of us could get the time of day from the boss until there was a crisis of some sort and he HAD to give us some time.

Here’s the thing: I worked at a STELLAR firm. Not just good – these people are truly great at what they do. My old boss is one of the best business lawyers in town. And quite possibly they are one of the most progressive firms in town: one of the three named shareholders is a woman, and at the time I left four out of thirteen shareholders were women. But still, they had no maternity leave policy for associates, and young associates who took time off to have a baby had to take minimal time off or face being “mommy tracked.” If you stuck it out, you still had to compete at a disadvantage compared to the male associates, because there was an assumption that mommies would eventually quit. I once was told by the founding shareholder that the other IP attorney at the firm would probably leave because her husband had just made partner in the firm.

This, however, is not why I left Big Law. I’m enough of a feminist to have stood my ground and fought, but I didn’t believe in what I was fighting for. I wasn’t loving the rest of my Big Law career enough to want to do that. As a solo, I have more control over my lawyering life, and a better ability to support other women lawyers on their way up.

We need to be grown ass women lawyers and help one another!

The Importance of Great Customer Service for a Successful Law Firm

How ‘Knowing’ Everything Limits Your Learning

You Ask…I Answer. “I Want To Fire A Pro Bono Client”