Michael Whelan is a divorce attorney in Leander, Texas, a northern suburb of Austin. He attended the University of Texas School of Law where he formed the Future Solo/Small Firm Attorney Group, a training and networking club for law students looking toward small office practice. He lives with his wife, four children, dog, cat, fish and ferret in Leander. 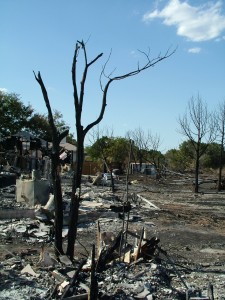 If your mind works like mine, you probably have a hard time watching the first half of a movie.  You’d like to get past the strained melancholy of the reluctant hero and move right to the fire-breathing dragons.  If so, you might find this post takes a little bit to develop, but we’ll get to the fire so stay with me.

I’ve talked in other media about the amazing help we received after we lost our house in the Texas wildfires.  That’s the exciting end to the drama.  This article, however, will tell you how we got there – how simple networking led to the help we needed in response to a disaster we never expected.

I recently graduated from the University of Texas School of Law.  Like many of my peers, I bought into the logic that going to UT was a ticket to the big leagues.  When I started school in September of 08, I had no idea that October of 08 would bring bank closures, bail-outs, double dip recession and a collapsed job market.

By the beginning of my second year, I knew the corner office wasn’t in my future.  I chose to embrace reality and get ready to open my own firm upon graduation.  I started the Future Solo/Small Firm Attorney Group at UT and asked local attorneys to come speak to us about practicing law.  The solo attorney crowd in Austin saw what we were trying to do and jumped to get involved. Through my first year I did little things to get our Group in front of attorneys:  I attended events put on by the Austin Bar Solo Small Firm section, I took at least one attorney to lunch each week, and I volunteered to help the Career Services Office reach out to lawyers.  Without much effort I became known as “the Solo/Small Firm Kid.”  Knowing what I wanted made me stand out, and standing out made me memorable.

As an example, I found myself shocked when a local civil litigator named Kerry O’Brien knew me before we even met.  I had sent him a resume in response to a Craigslist post for a paralegal.  A book I had just finished advised that job interviews, even for jobs you could never get, are a great way to meet lawyers.  I was surprised when Kerry already knew something about me.  Apparently he went to lunch the day before our interview with another attorney.  The two talked about the overwhelming response to Kerry’s job posting, and my name came up.  “The Solo/Small Firm Kid” label entered the conversation, and Kerry knew something good about me before I even sat down to chat with him.  The interview went well, Kerry hired an actual paralegal, and he and I became Facebook friends.

Okay, that’s the build-up.  Let’s get on to the fire-breathing.

My family and I went up to Dallas for Labor Day this year.  I had just finished the Texas bar exam and needed a mini vacation.  While we were there we got a call from a friend who had gone by our house in Leander to feed the animals.  She told us that a fire had started nearby and could be headed our way.  We didn’t think much of it.  We’d had a fire scare just a couple of weeks before so we had all of the important stuff together.  We asked our friend to go into our bedroom and grab the photos, the hard drives, the important documents, and random other sentimental items.  She put it all in her car while the fire department put down the small fire.  Once they had it all under control, the firefighters told our friend she could put everything back in the house and they left.

Our friend took everything out of her car and put it in the playroom, then went to let the dog out back.  When she did she saw a 20 foot wall of flames climbing over our back fence.  She barely got out with the animals.  Once we got word that our house was gone, I took my wife and kids to my sister’s place near Tyler, then drove back to Leander to pick up the pieces. 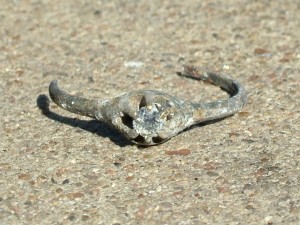 Things back home were crazy.  The fire completely leveled our house, leaving only a few recognizable appliances.  Overwhelmed by the total destruction, I avoided the site until my wife asked me to find a couple of items – her grandmother’s ring and her mother’s ashes which were kept in a sealed urn.  I put word out on Facebook that I would be digging through the rubble that afternoon and asked for help.  I had no idea who would come but I knew I needed some hands.

When I got to the house I pulled out some work gloves and started digging.  Different people trickled onto the site – buddies from church, my wife’s friends from the local Twilight Moms group, even the brother of my sister’s college roommate, a guy whom I had never met before.  The arrival that surprised me most reached out his hand to remind me of his name: Kerry O’Brien.

Here was this guy that I’d met during a random interview who called me into his office because I started a club at UT and I liked to read Dante.  He saw a Facebook post and came to dig through mud and ash to find what memories could be salvaged from our destroyed home, and we did find those items.  The humility and kindness of a number of attorneys absolutely amazed me.  Some gave gift cards, others sent books for my kids to read, still others gave me some old suits for court appearances, and Kerry came to turn up the ashes. Obviously lawyers were not our only helpers.  The city got involved, neighbors pitched in, church officials and members contributed, former co-workers lent support, family put on superhero caps, friends reached out a hand… The list of people to thank grew too long to manage.

Each group and each individual knew us because at some point we had put ourselves out there.  Anonymous giving happened, but most of the support that came our way had some connection to our family.  We had “networked,” and our network proved far larger and more caring than we had ever imagined.

I later spoke to our church congregation to thank the members.  I closed my remarks by saying that I was glad our house had burned down.  My 8 year old daughter thought that strange and asked why I would say that.  I asked her, “Would you rather have all that stuff or all these friends?  I think we got the better end of this deal, don’t you?” 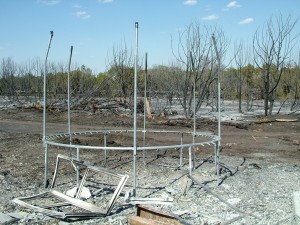 “Networking” has so many meanings, and most of them make us uncomfortable.  What I learned from our fire recovery, what I tried to teach my daughter and what I hope you will understand is this: real networking is a human endeavor.  We reach out to form relationships in the many communities of which we are a part.  We are friends, and friends support each other.

I hope you never face this kind of disaster.  I pray that all you’ll ever need from your network are some nice referrals.  But I encourage you to put yourself out there for another reason – to be a friend to another person.  Putting on that corny nametag and shaking a few hands may only lead to blank stares and bad appetizers, but if you reach out you may find more blessings than you could count.  I sincerely thank those who have helped my family, and hope that this story will push you to make a new friend today.  You never know what might come from it.